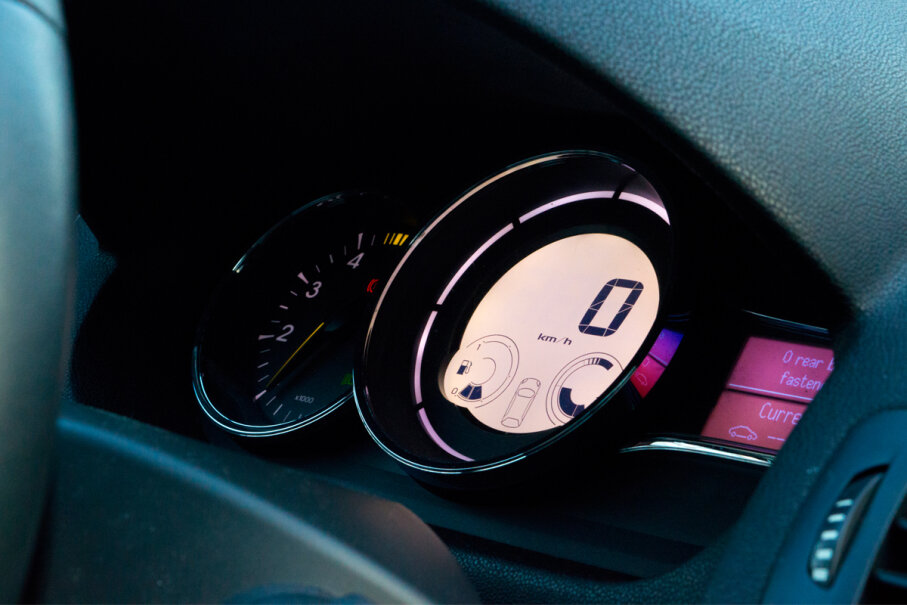 Each year, cars seem to get more and more complicated. Cars today might have as many as 50 microprocessors on them. Although these microprocessors make it more difficult for you to work on your own car, some of them actually make your car easier to service.

Some of the reasons for this increase in the number of microprocessors are:

In this article, we'll take a look at how each of these factors has influenced the design of your car. 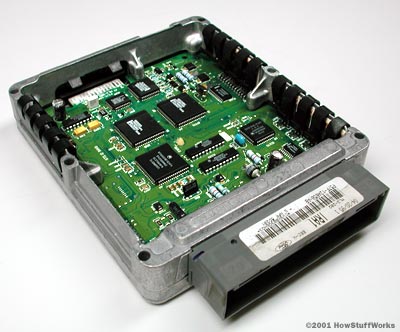 The computer from a Ford Ranger

Before emissions laws were enacted, it was possible to build a car engine without microprocessors. With the enactment of increasingly stricter emissions laws, sophistic­ated control schemes were needed to regulate the air/fuel mixture so that the catalytic converter could remove a lot of the pollution from the exhaust. (See How Catalytic Converters Work for more details.)

Controlling the engine is the most processor-intensive job on your car, and the engine control unit (ECU) is the most powerful computer on most cars. The ECU uses closed-loop control, a control scheme that monitors outputs of a system to control the inputs to a system, managing the emissions and fuel economy of the engine (as well as a host of other parameters). Gathering data from dozens of different sensors, the ECU knows everything from the coolant temperature to the amount of oxygen in the exhaust. With this data, it performs millions of calculations each second, including looking up values in tables, calculating the results of long equations to decide on the best spark timing and determining how long the fuel injector is open. The ECU does all of this to ensure the lowest emissions and best mileage. See How Fuel Injection Systems Work for a lot more detail on what the ECU does.

The pins on this connecter interface with sensors and control devices all over the car.

A modern ECU might contain a 32-bit, 40-MHz processor. This may not sound fast compared to the 500- to 1,000-MHz processor you probably have in your PC, but remember that the processor in your car is running much more efficient code than the one in your PC. The code in an average ECU takes up less than 1 megabyte (MB) of memory. By comparison, you probably have at least 2 gigabytes (GB) of programs on your computer -- that's 2,000 times the amount in an ECU.

In the next section, we'll take a look at how communication standards have made designing and building cars easier.

The diagnostic port from a Toyota minivan

­­Another benefit of having a communications bus is that each module can communicate faults to a central module, which stores the faults and can communicate them to an off-board diagnostic tool.

This can make it easier for technicians to diagnose problems with the car, especially intermittent problems, which are notorious for disappearing as soon as you bring the car in for repairs.

BATauto.com: Technical Info Pages lists the fault codes stored in the ECU for various carmakers. Sometimes, the codes can be accessed without a diagnostic tool. For instance, on some cars, by jumping two of the pins in the diagnostic connecter and then turning the ignition key to run, the "check engine" light will flash a certain pattern to indicate the number of the fault code stored in the ECU.

Let's take a look at how microprocessors and communications standards have made cars easier to build. 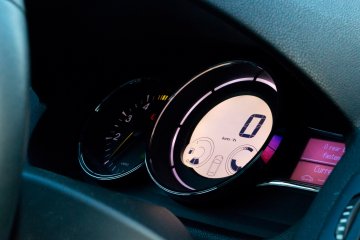 Computers on the dashboard are easily seen by drivers.
PredragKezic/ThinkStock

­Having communication standards has made designing and building cars a little e­asier. A good example of this simplification is the car's instrument cluster.

The instrument cluster gathers and displays data from various parts of the vehicle. Most of this data is already used by other modules in the car. For instance, the ECU knows the coolant temperature and engine speed. The transmission controller knows the vehicle speed. The controller for the anti-lock braking system (ABS) knows if there is a problem with the ABS.

All of these modules simply send this data onto the communications bus. Several times a second, the ECU will send out a packet of information consisting of a header and the data. The header is just a number that identifies the packet as either a speed or a temperature reading, and the data is a number corresponding to that speed or temperature. The instrument panel contains another module that knows to look for certain packets -- whenever it sees one, it updates the appropriate gauge or indicator with the new value.

Most carmakers buy the instrument clusters fully assembled from a supplier, who designs them to the carmaker's specifications. This makes the job of designing the instrument panel a lot easier, both for the carmaker and the supplier.

It is easier for the carmaker to tell the supplier how each gauge will be driven. Instead of having to tell the supplier that a particular wire will provide the speed signal, and it will be a varying voltage between 0 and 5 V, and 1.1 V corresponds to 30 mph, the carmaker can just provide a list of the packets of data. Then, it is the carmaker's responsibility to make sure that the correct data is output onto the communications bus.

It is easier for the supplier to design the instrument panel because he doesn't need to know any details of how the speed signal is generated, or where it's coming from. Instead, the instrument panel simply monitors the communications bus and updates the gauges when it receives new data.

­C­lusters are now being used on a smaller scale for sensors. For instance, a traditional pressure sensor contains a device that outputs a varying voltage depending on the pressure applied to the device. Usually, the voltage output is not linear, depends on the temperature and is a low-level voltage that requires amplification.

Some sensor manufacturers are providing a smart sensor that is integrated with all the electronics, along with a microprocessor that enables it to read the voltage, calibrates it using temperature-compensation curves and digitally outputs the pressure onto the communications bus.

This saves the carmaker from having to know all the dirty details of the sensor, and saves processing power in the module, which otherwise would have to do these calculations. It makes the supplier, who is most up on the details of the sensor anyway, responsible for providing an accurate reading.

Another advantage of the smart sensor is that the digital signal traveling over the communications bus is less susceptible to electrical noise. An analog voltage traveling through a wire can pick up extra voltage when it passes certain electrical components, or even from overhead power lines.

Communication buses and microprocessors also help simplify the wiring through multiplexing. Let's take a closer look at how they do this. 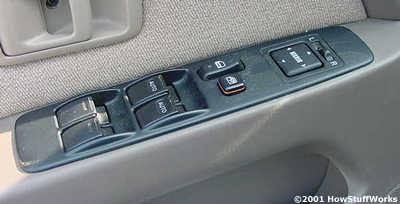 Doors with lots of switches are becoming more and more common.

­­Multiplexing is a technique that can simplify the wiring in a car. In older cars, the wires from each switch run to the device they power. With more and more devices at the driver's command each year, multiplexing is necessary to keep the wiring from getting out of control. In a multiplexed system, a module containing at least one microprocessor consolidates inputs and outputs for an area of the car. For instance, cars that have lots of controls on the door may have a driver's-door module. Some cars have power-window, power-mirror, power-lock and even power-seat controls on the door. It would be impractical to run the thick bundle of wires that would come from a system like this out of the door. Instead, the driver's-door module monitors all of the switches.

Here's how it works: If the driver presses his window switch, the door module closes a relay that provides power to the window motor. If the driver presses the switch to adjust the passenger-side mirror, the driver's door module sends a packet of data onto the communication bus of the car. This packet tells a different module to energize one of the power-mirror motors. In this way, most of the signals that leave the driver's door are consolidated onto the two wires that form the communication bus.

The development of new safety systems has also increased the number of microprocessors in cars. We'll talk about this in the next section.

­­Over the last decade, we've seen safety systems such as ABS and air bags become common on cars. Other safety features such as traction-control and stability-control systems are starting to become common as well. Each of these systems adds a new module to the car, and this module contains multiple microprocessors. In the future, there will be more and more of these modules all over the car as new safety systems are added.

It seems that there is no limit to how much technology carmakers are going to pack into our cars. The addition of all these electronic features is one of the factors driving carmakers to increase the system voltage on cars from the current 14-V system to a 42-V system. This will help provide the extra power these modules require.

For more information on car computers and related topics, check out the links on the next page.