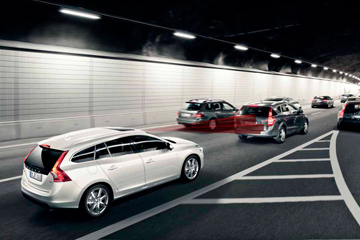 Volvo's City Safety system automatically brakes if the driver fails to react in time when the vehicle in front slows down or stops. Want to learn more? Check out these Brake Pictures.
Courtesy of Volvo Cars of North America, LLC

Ah, the morning commute. You're exhausted, traffic is crawling, and your phone is already chirping away with e-mails, appointment reminders and to-do items that you'd rather not do at all. You glance down to see what that stupid device is freaking out about this time, and when you look back up, the Humvee in front of you has stopped. It's now inches in front of you. You make a face like surprised little Macaulay Culkin in "Home Alone" and jam on the brakes, hopefully in time to avoid a huge insurance bill and an angry woman in a muumuu suing you for whiplash.

But this kind of mishap may be a thing of the past, thanks to automatic braking. These sophisticated systems use the sensors and computers in your car to anticipate an accident and help your sleepy-self avoid bumping fenders -- or worse.

These accident avoidance technologies have been available abroad for years, but we're really just beginning to see them in the United States in the past few years. You might think that's because we're so lawsuit-happy over here (remember that muumuu-wearing whiplash victim we mentioned?), but David Sullivan, the resident expert at Subaru on its EyeSight system, gives a more charitable explanation.

"The U.S. is such a broad, highly varied market with many different needs. People across the country drive differently, and the different regions are like a bunch of little countries," he said. In Japan, where they've had EyeSight since the 2007 model year, roads are "fairly homogeneous, and road laws are the same everywhere." No special rules about U-turns or left on a one-way or right on red -- but not that red, not in this state -- for them.

Now that the technology is coming to the States in more models, let's take a look at what it can do for you before the caffeine kicks in on your morning commute.

In pretty much every case, automatic braking is part of a suite of safety system technology that works together to save your sorry butt. The system in a Subaru is called EyeSight; in a Volvo, it's called City Safety. Other manufacturers, including Cadillac and Mercedes-Benz, have something similar.

"The system works very simply from an engineering perspective," said Adam Kopstein, a safety and compliance manager at Volvo. "Making the car stop is easy; we've got the sensors and ABS. The trick is making sure it only does it when it's supposed to." Kopstein is a very funny guy, because after calling this an easy and simple system, he explained in detail how that trick is accomplished.

Every manufacturer uses a different setup, so we'll use Subaru and Volvo's systems as examples of what's out there.

Subaru's EyeSight, not surprisingly, uses two black and white cameras that work like your eyes to triangulate the speed and distance of the vehicle in front of you. They're mounted at the top of the windshield, and they scan every 0.1 seconds, looking for contrast with the background and vertical surfaces. The software is programmed to recognize several types of images, like the rear ends of vehicles, motorcycles, bicycles and pedestrians.

Volvo uses lidar (which is not related to the lion-tiger mashup we all know as a liger) in its City Safety system. Lidar is laser radar, and it sends out a signal that pings off objects in front of it to determine distance and speed. Since lidar works best at short range, Volvo also has a camera mounted in the windshield and radar in the bumper that work together at high speeds as part of its collision warning system with full braking capability. The radar can see several hundred yards in front of the car, but it can't tell what it's seeing. The camera picks up on what the radar is seeing and can identify the object as a problem or something to ignore.

So far, this is just how your car knows that there's a Humvee in front of you, and that the Humvee has slammed on its brakes. While your car's computer does some panicky calculations, let's move to the next page.

So now your car has determined that you're about to hit the Humvee. It can also sense that you're not doing a thing about it. You're not steering away from its massive bumper, and you're not jamming on the brake. It's time for your car to take things into its own hands. Circuits. Whatever.

At under 20 miles per hour (32.2 kilometers per hour) or so, most systems can avoid the crash completely, although the goal is merely to minimize the impact and therefore the injury. "It's an additional safety layer, but we're not trying to take the responsibility of driving away from the driver," Sullivan said. "If the driver is distracted, EyeSight will warn them and help them out if they panic or spazz." That's the Macaulay Culkin face moment that we were talking about earlier.

EyeSight will warn you when you're about a second away from the Humvee's bumper, then apply the brakes lightly to help you out. Most people don't press the brakes hard enough when they're trying to avoid a crash, oddly enough. But if you're still not doing anything, the Subaru will apply full braking force to the tune of about 1 g.

The Volvo system is actually two systems layered one on top of the other: City Safety for slower speeds, and the collision warning system for higher speeds. Since in our example you're crawling along on your way to work, City Safety will come into play. If the lidar (rawr!) thinks you're too close to the car in front and you're not doing anything about it, you get no warning. It starts braking for you, and then lights up a red LED in the windshield that mimics a brake light to get your attention. The idea is that maybe then you'll react and press the brake on your own; but if you don't, Volvo's got it.

If you're going a bit quicker, Volvo's second system will pick up where City Safety leaves off. Above 30 miles per hour (48.3 kilometers per hour) or so, the system will give you a warning if you're following too closely. It will also precharge the brakes so they're ready to slow you down as soon as you heed the warning -- or take over if you don't.

These systems work best when the difference between the speed of your car and the car you might hit is less than 20 miles per hour (32.2 kilometers per hour). If the speed differential is greater than that, the rest is up to you. "If you're flying down the road, EyeSight isn't going to save you from yourself," Sullivan said. 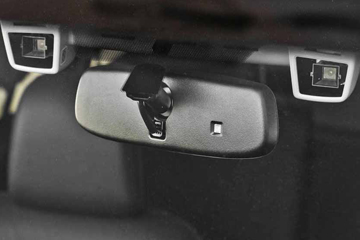 Subaru's EyeSight system uses two black and white cameras that work like your eyes to triangulate the speed and distance of the vehicle in front of you.
Courtesy of Subaru of America, Inc.

Both Subaru and Volvo -- and really any manufacturer you talk to, as long as it's not Audi with its self-driving car -- make it clear that they are not trying to take driving away from the driver. "If any system begins activation but the driver decides to steer away, you will not be in a fight with the vehicle," Kopstein said. "The car will release the brakes so you can maneuver out of the situation." Sullivan put it even more plainly: "We want you to drive the car."

So, if no one is trying to take away the driver's responsibility, why bother to have the car do the braking for you at all? Why not just beep or blink or, in the case of Cadillac, vibrate the seat to let you know you need to pay attention and drive the dang car?

Research says that a third of all reported collisions happen when a front bumper meets a rear bumper. And in half of those accidents, the driver of the rear car doesn't brake at all. So, apparently, we could use a little help in the braking department.

The IIHS determined that cars with automatic braking systems had between 14 and 27 percent fewer insurance claims for damage to cars, depending on the system. And that was for 2010 cars, which is practically the dark ages for these systems.

Besides, automatic braking doesn't operate alone. It's part of more comprehensive systems that include throttle management, lane departure warnings, adaptive cruise control and other safety systems. And the technology is only getting better, with better cameras and sensors. As the technology moves forward (EyeSight and City Safety are both already on their third generation), it'll get cheaper, and as it gets cheaper, it'll be in more cars, which benefits everyone. Even the woman in the muumuu driving the Humvee.

When I set out to write this article, I drew up a little plan for myself: Who to talk to, what to include and what the final version would look like. It was a terrible plan.

That's because these systems are far more sophisticated than I expected. Like Adam Kopstein at Volvo said, "Making the car stop is easy." That's what I figured. What I didn't count on was that next part of his quote: "The trick is making sure it only does it when it's supposed to." The variety of sensors, cameras, recognition profiles, warnings and brake applications for this one little part of a safety system made for a very complicated explanation.

So I had to revisit my plan. And by "revisit," I mean toss-out completely and let my conversations with the experts guide the story. There's so much more information that I wish I could have fit into this article! Like how Volvo tested its cameras in European taxis, and the resulting images nearly gave the researchers heart attacks. And how EyeSight will tell you if the car in front of you has pulled away from the red light while you continue to sit there playing Angry Birds and holding up traffic.