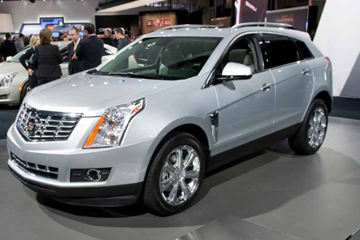 The 2013 Cadillac SRX is just one of several Cadillac vehicles to feature enhanced safety technology -- including the all-new Safety Alert Seat. Want to learn more? Check out these Car Safety Pictures.
© General Motors

First we got automatic braking systems, which did the brake pumping for the driver in a sudden stop. Then we got airbags, which protected our noggins and knees from whacking into the windshield and dashboard in a crash. Safety systems eventually got even crazier, with sensors and alerts and cameras and beeps and blinks. Modern cars have more warning lights than an Apollo space capsule.

How about your rear end? That's right, we're talking about your butt.

The following three 2013 Cadillac models will have a new safety feature called the Safety Alert Seat for the driver: the XTS sedan, ATS sedan and the SRX crossover. While your eyes and ears and hands and feet are piloting the car, your lazy butt, which until now had bupkes to do in the car, is going to tell you when you're about to do something stupid. Stay with us here ... this makes way more sense than you probably think.

Wiggle It Just a Little Bit

Cadillac's Safety Alert Seat has two small motors in the driver's seat, one on the right side and one on the left side. Both are toward the back of the seat. These motors are connected to Cadillac's electronic safety systems, and when a problem is detected, one or both motors vibrate.

When Ray Keifer, General Motors active safety technical fellow and the inventor of this seat, was asked where the driver would feel these vibrations, he quite diplomatically replied, "the upper thigh." Not that a playground full of third-graders is a better judge of human anatomy than a scientist, but pretty much everyone is going to agree with the kids that what we're talking about here is the butt. You're going to feel it on your butt.

Speaking of science, what the seat actually uses is called haptic feedback. Keifer explained that there are lots of ways to get information to our brains, like our senses of sight, smell, and hearing. "Haptic" is related to our sense of touch. "It's also used to describe kinetic sensations; it could be the whole vehicle jerking," said Keifer. "Any type of vibration is a haptic alert."

The vibrations signal the driver that something is going wrong, or more likely, is about to go wrong if he or she doesn't change something soon. Take the Cadillac lane departure warning feature, for instance. "If you're drifting in your lane without using the turn signal, it triggers the lane departure warning," said Keifer. "The driver feels three quick pulses on the left side of the seat. It's similar to a rumble strip feeling, very intuitive."

See? It makes way more sense than you thought, right? 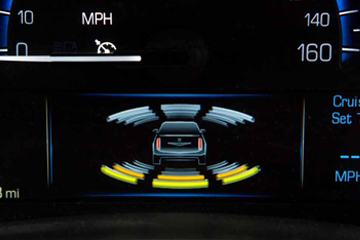