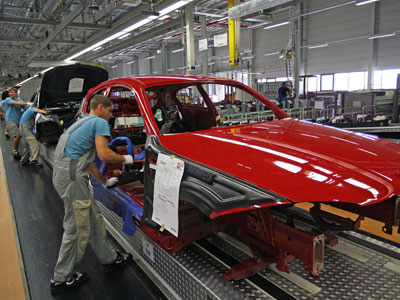 Workers fit the body of a BMW 1 in the BMW plant in Leipzig, Germany, in 2007.
AP Photo/Eckehard Schulz

While the basic principles of automotive production lines are the same, recent innovations have changed things a bit. Mechanization of tools and parts revolutionized production once, and now it's happening again. Robots now perform some of the tasks that human autoworkers formerly were asked to perform. Since production line work involves repetitive movements, it's easy, and sometimes safer, for a robot to take over a role a human used to play. While that unfortunately costs an autoworker a job, it tends to lower production costs, too.

It's probably safe to say that most of us have seen the old newsreel footage of auto workers building cars in greasy, grimy, dirty factories; however, new automotive production lines have been praised for their clean, light and open architecture. The BMW assembly line in Leipzig, Germany, is a great example of that. The assembly line winds its way through the factory, which is itself a light-filled maze of glass. Everyone who works there -- from the executives to the cleaning staff -- can look into the production line and see the heart of the company: its cars.

Production lines aren't just cleaning up their architecture. Some are working to clean up the environment. At the Subaru plant in Lafayette, Ind., 99.8 percent of the plant's waste is recycled. At the factory, which builds the Subaru Tribeca, Legacy and Outback, as well as the Toyota Camry, the goal is to contribute zero waste to landfills. Other automakers, including Honda and Toyota, also use the practice, which cuts their costs as well. The companies persuade suppliers to take back and reuse packaging, which brings the supplier's costs down, too, because they have to buy fewer packaging supplies. Even imperfect parts that might be otherwise thrown away are recycled. For instance, at the Subaru plant, flawed plastic bumpers are ground into plastic pellets to make new bumpers.