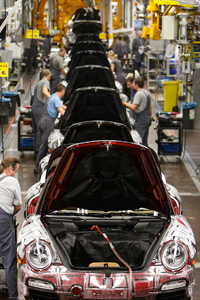 Employees of car manufacturer Porsche assemble the Porsche 911 on a production line in Stuttgart, Germany, in 2008.
AP Photo/Thomas Kienzle

What's striking about modern automotive production lines is that they haven't changed all that much from the basic Ford system from so long ago. The cars still come to the workers at individual work stations, each worker performs a specific task and when all the tasks are done, at the end of the line, you'll see brand new ready-to-drive cars rolling off the assembly line.

On modern production lines, many of the parts that go into assembling a car aren't made on-site. Instead, car companies buy parts (like brake rotors or transmissions) from other companies -- suppliers -- many of which have their own assembly lines. In some cases, the car company itself will have factories where the parts are made. So, for example, before a Chevrolet Malibu is assembled at one plant, its engine and transmission must be delivered from the plants where they were assembled.

One key to the automotive production line is the standardization of the product. As Henry Ford once said about his Model T, "You can have any color you want, so long as it's black." Ford was actually making a point about the production line: because each stage is interdependent on the others to make a complete car, changing one stage means changing others, and that means slowing down a very efficient system.

Still, to stay in business today, car companies need to offer lots of different models -- something that's hard to do when you're dependent on a production line. So, car companies do something called platform sharing. With platform sharing, a car company will design its cars to share parts. It saves the company money, makes production easier and still gives consumers what they want. Platform sharing means that a Chevy Silverado and a Chevy Tahoe look alike and have similar capabilities because they share parts. In fact, the Tahoe and Silverado, along with the Chevy Avalanche, GMC Yukon and Sierra, Cadillac Escalade and Hummer H2 all share parts, making it easy for GM to offer consumers what they want.