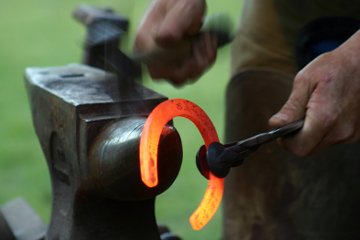 The profession of blacksmith goes back many thousands of years. In ancient times the blacksmith would pound metal into useful objects with a hammer, often heating the metal first in a forge. (The word "Smith" comes from the same root as "smite," so a blacksmith was someone whose job was smiting metal blackened in a fire.)

Blacksmiths are relatively rare today -- though they do still exist and use tools much more modern than those used in ancient times. The job of working metal into useable objects is now accomplished mostly by machine. Nowhere is this art of metal forming more important than in the automotive manufacturing industry, where every metal part from the body of the car to the smallest lug nut on the wheel is created by industrial metal forming processes. These processes exist on the cutting edge of modern manufacturing, where computers meet the mechanical and hydraulic machinery of the auto plant.

Automotive metal forming is one of the most important aspects of auto manufacturing. If it weren't possible to work metal into useful shapes, cars couldn't exist. And the ability of machines -- often controlled by computers -- to turn out automotive parts quickly and reliably is one of the things that make it possible to buy a car for somewhat less than it would cost to buy a house.

But how does metal forming work? It's easy to understand how a modern blacksmith can shape metal with a power hammer and an oxy-acetylene torch, but how can a machine do these things? Over the next few pages, we'll discuss how this process of metal forming can be mechanized and performed on a large-scale industrial basis. We'll look at some specific techniques and processes that are used in auto manufacturing. We'll also look into the future and see how metal-forming technologies being developed today will help us build the cars of tomorrow.

One of the most important things about metal is that it can undergo plastic deformation. That doesn't mean metal is made out of plastic, but it can do one of the things that plastics can: It literally can take on almost any shape that we can imagine.

The process of deformation begins with a blank, a quantity of metal in some basic form that will undergo the change in shape. The blank becomes the workpiece -- the piece of metal to be reshaped -- in the metal forming process. For automotive metal forming, the blank is often made of sheet metal, which can be stamped, cut or bent into a shape needed for an automobile's body. Alternatively, it can be a solid block of metal in a cubical or lens-like shape. Here are some ways that a metal workpiece can be deformed during the automotive manufacturing process:

Bending: In bending, force is applied to a sheet metal workpiece to produce a curvature of the surface. Bending is generally used to produce simple curved surfaces rather than complex ones. A mechanically operated press drives a punch against sheet metal, forcing it into a simple die with enough pressure to produce a permanent change in the metal's shape. The amount of pressure is important. If not enough pressure is applied, the metal can simply spring back into its original shape. If too much is applied, it can break.

Drawing: In drawing, the sheet metal is forced against a die that has been cut into the three-dimensional, often curved shape that the sheet metal is to take on. In effect, the die is used as a mold for the metal. This technique can produce relatively complex shapes. Once again, pressure is applied to the workpiece using a hydraulically or mechanically operated punch. There are a number of dangers involved, not so much to people (since the process is largely mechanized) but to the metal itself. It can crack from too much pressure or wrinkle from its interaction with the die. Lubricant can be used to make the metal slide more smoothly against the die, avoiding the possibility of wrinkling. Alternatively, the wrinkled edges can be trimmed from the metal in a separate operation. This method is commonly used to make auto body parts and fuel tanks.

Stamping: In stamping, a device called a stamping press is used with a series of dies to cut and form metal into various shapes. This is commonly used to make auto parts such as hubcaps and fenders.

Forging: The forging process uses a hammer or press that is essentially a mechanized version of the hammers used by ancient blacksmiths. The metal is hammered against a surface that serves as an anvil. It can be hammered repeatedly so as to form complex shapes. This can be used as an alternative to the drawing process.

The above processes are generally used with cold metal. Hot metal can also be used, sometimes at high enough temperatures that the molten metal can be poured into a die. This requires very expensive dies that can withstand the heat and must be done quickly, to minimize the exposure of the die to the molten metal.

On the next page we'll look at how modern metal forming technologies are moving auto manufacturing into the future. 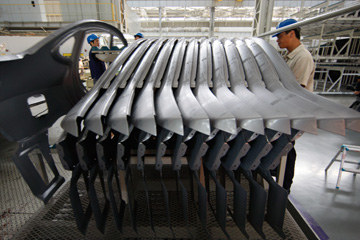 They guide the process. A computer can be used to make split second decisions to guide metal forming operations through complex sequences -- for instance, using a forging hammer against a workpiece in much the same way that an ancient blacksmith would, but with the augmented physical force of hydraulic machinery. The action of the hammer can be programmed in advance to produce shapes as complex as those created by a human artisan's hands. Similarly, computers can control the flow of the workpiece between multiple stages in the operation to produce the finished shape.

They simulate the process. A computer can be used to simulate the physical forces involved in metal forming so that new metal forming operations can be invented without having to use expensive machinery to experiment with new ideas. Sophisticated simulation software is available to replicate metal forming operations on the computer, so that scientists can see the result of applying heat and force to different kinds of metal. Mistakes made on the computer are much less costly than those made in the real world and allow the sort of trial and error that would be a waste of time on actual machinery.

Computer simulation is opening new vistas in metal forming. Many of the new metal forming technologies are based on a deep understanding of the micro-structure of various kinds of metal and the physical processes that go on inside metal subjected to pressure and heat. Some of the new processes are hybrids of old processes. There has also been a move toward hot-metal processes, which allow the use of metals that don't lend themselves well to cold processes.

These new technologies allow such innovations as the use of lighter metals that still retain the strength of traditional automotive parts. This is useful, say, in the manufacture of fuel efficient vehicles or battery-electric vehicles where the car body needs to be as light as possible to offset the considerable weight of the battery array. These technologies also allow auto parts to be manufactured less expensively without a drop in quality. For instance, electromagnetic forming techniques, in which the metal workpiece is exposed to a magnetic field that sets up an electric flow in the metal itself, can be used to speed up the forming process without the resulting tearing and wrinkling that would normally occur. This allows the use of processes not formerly possible in automated metal forming.

In the years since Henry Ford demonstrated the feasibility of inexpensive assembly line manufacture of cars and auto parts, the science and technology of metal forming have come a long way in showing the auto manufacturing industry how to produce extraordinary cars without an extraordinary price.

For more information about automotive metal forming and other related topics, follow the links on the next page.