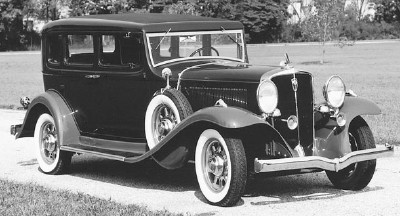 The 1932 Studebaker President had one wheelbase, 135 inches, for all models.

This same lineup returned for 1932, when either a small 205-cid six or smaller 190-cid six powered the Rockne. The senior-line six, a stroked 230 with 80 bhp, went into a new 117-inch-wheelbase Standard chassis that also served Dictator Eights. The Commander's wheelbase increased an inch. All Presidents had a 135-inch wheelbase.

For 1933, Commanders rode a 117-inch wheelbase with a smaller 235-cid straight eight, but at 100 bhp, it had almost the same power. The President retained its 135-inch chassis and the smooth 337-cid 135-bhp eight. The 125-inch-wheelbase President returned -- this time with a smaller 250-cid eight rated at 125 horsepower. The Dictator name was wisely dropped for that year.

Curiously, the Dictator name returned for '34. Comprising Standard, Special, and Deluxe models, Dictators had a 113-inch-wheelbase and were powered by a 205 six with 88 bhp. That year's Commanders rode a 119-inch wheelbase and carried a revived 221 eight, albeit with 103 bhp. Presidents were downgraded to a 110-bhp, 250-cid eight and now rode a 123-inch chassis.

Sales dwindled from over 123,000 for 1930 to under 26,000 for '32, dropping the make from fourth to 11th. Studebaker finished 14th for 1933, when it went into receivership after a hoped-for merger with White Motors fell through. With that, company head Albert Russell Erskine resigned, then committed suicide soon afterward.

Stepping into this managerial breach were production vice-president Harold S. Vance and sales VP Paul G. Hoffman, who would jointly guide Studebaker through 1949. They quickly got rid of Pierce-Arrow (the luxury market had evaporated), then took steps to get idle production lines moving again.

The eight-cylinder engine in the 1934 Studebaker Commander produced 103 horsepower.