What percentage of air pollution is due to cars? 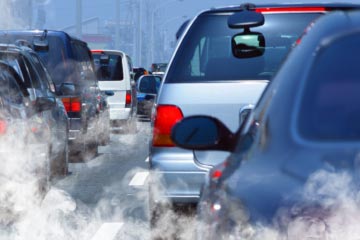 Motor vehicles emit a number of pollutants. Perhaps the most damaging is particulate matter, a combination of organic material and inorganic substances. Dust, soil, acids, metals, and organic chemicals are some of the components of particulate matter. Most of the stuff is extremely small, and the smaller the particle, the more damaging; particles less than 10 micrometers in diameter are capable of entering the lungs. Once in the lungs, the particulate matter can also cause serious problems for the heart. Nitrogen dioxide, produced when fuel is burned at high temperatures, can also spell trouble; in high concentrations, it can damage your lungs and cause chest pains.

Volatile organic compounds (better known as VOCs) are also found in air pollution, and they're just as dangerous as the name would suggest. Unlike particulate matter and some of the other well-known pollutants, VOCs have no taste, smell or color. They're known as "volatile" because of how easily they evaporate at room temperature. Some VOCs, such as benzene, are known carcinogens. Though VOCs are primarily produced through industrial means, vehicles do release them as they burn fuel. Even car interiors release VOCs.

But just how much pollution do cars produce? The answer is more complicated than you might expect. For starters, air pollution isn't consistent around the world or even around the country. Areas of dense populations -- or, more specifically, areas where large quantities of fossil fuels are burned -- have much higher levels of air pollution than sparsely-occupied regions. Heavily-populated cities such as Los Angeles, Mexico City and Beijing are all famous for their air pollution. Weather conditions also impact air quality, resulting in daily fluctuations in the breathability of the air. So, pollution levels don't just vary from one geographic area to another; they also vary from one day to the next.

And yet with all those variables, scientists can still give us an approximate percentage of the air pollution produced by cars in the United States. According to the Environmental Protection Agency, motor vehicles produce roughly one-half of pollutants like VOCs, nitrogen oxide and particulate matter. Seventy-five percent of carbon monoxide emissions come from automobiles. In urban areas, harmful automotive emissions are responsible for anywhere between 50 and 90 percent of air pollution. All told, that's quite a lot of air pollution coming from our vehicles.

Because many people are reluctant to give up their cars or reduce the number of time spent on the road, the automotive industry has made some key changes over the years that help reduce the harmful emissions produced by vehicles. Catalytic converters were developed in the 1970s as a way to convert pollutants into emissions that aren't quite so harmful. More recently, hybrid and electric vehicles have become extremely popular among the environmentally-minded. But even with these advancements, air pollution remains a major concern. As the debate over the environment and the risks of fossil fuels continues, motor vehicles still represent a major challenge on the road to clean air.

National Historic Vehicle Register Honors Elite Cars
Henry Ford vs. the Dodge Brothers: An All-American Feud
Was the Ford Edsel really that much of a failure?