What if I pumped pure oxygen into my car engine instead of using the air in the atmosphere?

It would take more oxygen tanks than you could fit in your car to have enough oxygen to power your engine.
©2007 Microsoft Corporation

The internal combustion engine in most cars burns gasoline. To do the burning, an engine needs oxygen, and the oxygen comes from the air all around us. But what if cars carried their own and pumped pure oxygen into the engine instead?

The air around us is about 21 percent oxygen. Almost all the rest is nitrogen, which is inert when it runs through the engine. The oxygen controls how much gasoline an engine can burn. The ratio of gas to oxygen is about 1:14 -- for each gram of gasoline that burns, the engine needs about 14 grams of oxygen. The engine can burn no more gas than the amount of oxygen allows. Any extra fuel would come out of the exhaust pipe unburned.

The problem with oxygen 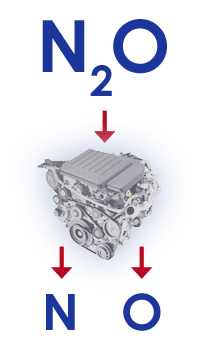 Even if you compress the oxygen to 3,000 psi (pounds per square inch), it will still take 100 cubic feet to store it. To put that into perspective, a standard scuba tank holds about 80 cubic feet of gas, so it would take 250 scuba tanks to hold all that oxygen.

Because oxygen is so bulky, what people use instead is nitrous oxide. In the engine, nitrous oxide turns into nitrogen and oxygen, and it's the oxygen that people are after. Nitrous oxide easily liquefies under pressure, so you can store a lot more of it in a bottle than you can gaseous oxygen, which does not liquefy. Even so, a typical system will supply only one to three minutes of nitrous to the engine. In the process, it adds about 100 horsepower to a typical big block engine. The biggest problem is that the extra gasoline that the nitrous allows in the cylinder increases pressure in the engine so much that it can do some real damage, unless the engine is designed to handle it. That would be the same problem you would have with an engine breathing pure oxygen -- it would have to be quite beefy to handle the load.

Does a dual exhaust system improve your car's performance?
Is premium gasoline really better for luxury vehicles?
Is anyone developing lifetime engine oil?