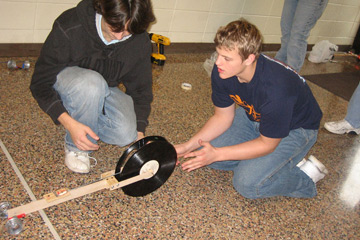 One of the things that makes mousetrap-powered cars so fascinating is their simplicity. Even though they work using principles of physics, you certainly don't need to be a physicist to build and enjoy them.

At their most basic, mousetrap-powered cars consist of:

In addition some builders have made cars that use the energy of multiple traps.

As you might guess, the materials used to build mousetrap-powered cars are light out of necessity. Foamcore board or balsa wood are often used for the body. The wheels can be off-the-shelf radio-controlled car wheels, but many builders use blank CDs or DVDs because their thin edges reduce friction.

So how do the cars work?

Simply put, they convert the energy of the mousetrap's spring into rotational energy that gets delivered to one set of wheels. A rod connected to the trap bar (the piece normally used to snap a mouse's neck) pulls on a long piece of string wound around one of the axles. As the string unwinds, it causes the axle and attached wheels to rotate. The spinning wheels push the mousetrap car across the floor.

Unlike when it's in mouse-catching mode, the mousetrap won't clamp on your finger and turn it into a throbbing purplish mess -- that is, if the trap is set up properly. Because it must pull against the string coiled around the wheels, the trap closes much more slowly than normal.

Got all that? If not, don't worry -- read the next page for information on how you can actually build a mousetrap-car.