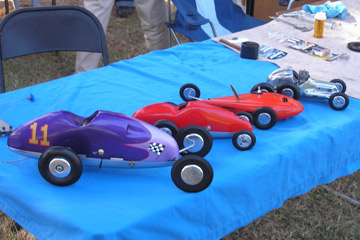 Building model cars has been a longtime hobby of car enthusiasts both young and old, but most model cars, whether built for display or to be raced, don't quite stack up to the sheer speed that tether car racing produces. Tether cars are built for maximum speed, which is why some people describe them as bullets on wheels, rather than cars. The world record for the top tether car speed is 214 miles per hour (344.4 kilometers per hour), well above the top speed of most model cars and perhaps more impressively, well above the top speed of most full-size cars [source: AMRCA].

Tether car racing is so named because each car races while tethered to a pole. The cars race individually on a circular track while attached to the center pole by a steel wire. Similar to rally car competition, the cars race individually and the winners of the tether car races are determined based on average speed of several laps. Once the cars get up to top speed, they can exert a force of about 91 Gs. That means the car is pulling away from the pole with a force about 91 times heavier than its own weight.

Although tether cars reach extremely high speeds, the actual construction of the cars and time spent building them is the true focus of the hobby. Each car, called a racer, has many of the same components of a real car, but on a much smaller scale. The cars easily come apart so they can be worked on. Those who build and race the cars are called drivers and they constantly modify and tweak the cars to outperform others on the track. Each car receives many hours of preparation time and testing before a race.

Tether car racing earns a certain unique cachet among other types of model car building, because of its long history and unique style of racing. On the next page, we'll learn how tether car racing got its start and what historical event propelled the hobby. 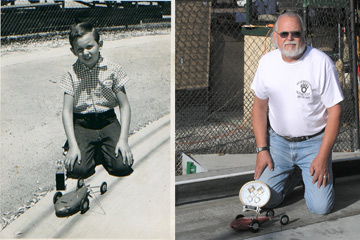 Two pictures of Ed Baynes -- after the Nationals competition at Anderson, Ind., in 1956, and after the same event held in the same place 50 years later.
Courtesy of Sandia National Laboratories

Shortly after Charles Lindbergh became the first person to fly his airplane over the Atlantic Ocean, model airplanes and cars quickly became a hobby in the United States. In the late 1930s, hobbyists started adapting their model airplane engines for use in model cars. One such hobbyist, Tom Dooling and his brothers, often referred to collectively as the Dooling Brothers, receive much of the credit for starting the tether car sensation. After building and flying model airplanes, the brothers decided that they could build a car using an airplane engine [source: Dooling].

It worked, and the Dooling Brothers began building their own tether cars immediately. The first unofficial tether car races were held in an abandoned lot in Los Angeles, Calif., in 1937 [source: Macropoulos]. In 1939, they held their first official miniature car race in Fresno, Calif., and one year after that they had built a car that reached a top speed of about 64 miles per hour (103 kilometers per hour). The brothers began building tether car engines and racers to be sold to the public in the late 1930s and early 1940s. They created a famous car design called the Frog, and also a popular engine called the Dooling 61.

During this time, tether car racing grew in popularity in the United States. By 1948, there were about 2,500 to 3,000 racers nationwide, with about 440 tracks throughout the country [source: Macropoulos]. However, during World War II, the demand for scrap metal contributions almost brought an end to the hobby. After the war, land development across the nation eliminated many of the tracks throughout the country.

Mainly because the hobby can be very time consuming, people began to lose interest during the 1980s, and by 2008 there were only 150 members remaining in the American Miniature Racing Car Association, or AMRCA [source: Macropoulos]. Although membership in the states is low, the hobby is still popular in many European countries and Australia. The AMRCA holds races in the United States and other countries under the World Organization for Model Car Racing, or WMCR, association. In 2009, an Italian driver, Gualtier Picco, set a new world record of 214 miles per hour (344.4 kilometers per hour) with his racer in Sydney, Australia [source: AMRCA].

Achieving that speed takes a significant amount of off-track tinkering and engine modifications. So let's go on to the next page to see what makes these cars so quick.

On the outside, tether cars look a lot like the vehicles that break land-speed records. The cars are narrow and most of the engine parts are enclosed inside the body of the racer. They're comprised of parts similar to a full-size car, including a combustion engine, exhaust pipe, air intake, flywheel, gearbox, driveshaft and wheels. The racers also have a tailskid, located in the back that stabilizes the vehicles at top speeds. The cars are typically about one to two feet (30.5 to 61 centimeters) long, and weigh anywhere from two to six pounds (0.9 to 2.7 kilograms).

In the international competitions, there are five different engine sizes that compete. The smallest is the 1.5 cubic centimeter (cc) engine, which has a top speed over 65 miles per hour (104.6 kilometers per hour). The other engine sizes are the 2.5cc, 3.5cc, 5cc and 10cc classes. The 10cc engine class cars are capable of producing speeds over 200 miles per hour (321.9 kilometers per hour) [source: Macropoulos]. These two-cylinder engines typically run on a fuel mixture of 80 percent methanol and 20 percent castor oil and are capable of producing engine speeds up to 45,000 revolutions per minute.

Drivers can spend hours modifying the cars to squeeze just a little more speed -- perhaps a half a mile per hour more -- out of the engines. In fact, making adjustments and changes to the engine are a huge part of the hobby. One of the main components contributing to the car's speed is the tuning pipe. The tuning pipe not only acts as the exhaust pipe, but it also helps to propel the car. The pipe's design sucks out any unspent fuel in the engine, shoots it to the back of the pipe where it becomes vaporized, and then forces part of it back into the engine. The vaporized fuel gives more power to the engine and helps it reach its top speed, but this effect only kicks in after the car reaches 100 miles per hour (160.9 kilometers per hour).

With cars regularly achieving speeds well over 100 miles per hour (160.9 kilometers per hour), the tracks they race on have to be specially built to accommodate the tether cars and protect the people watching the races. Go on to the next page to learn about tether car races. 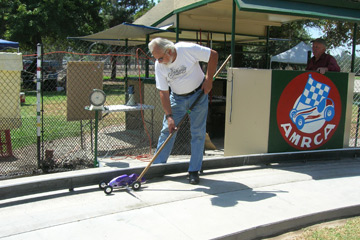 Ed Baynes readies a tether car for competition in the moment called "pushing off." The tether itself is faintly visible in the photo, attached to the frame of the car.
Courtesy of Sandia National Laboratories

We already know that the cars can achieve speeds faster than 200 miles per hour (321.9 kilometers per hour) and they pull with a force of up to 91 times their own weight, but how do these cars actually race on a track?

Each car has a metal bar attached to the body called the panhandle. The panhandle attaches the car to the steel cable and post in the center of the circular track. Official WMCR racetracks are made of flat concrete and are built in two different sizes. The first size is a 70-foot (21.3-meter) diameter track that provides the cars with six laps for a total distance run of one-fourth of a mile (.4 kilometers). However, the WMRC rulebook states that new tracks should be built at 19.9 meters (65 feet, 3 and 1/2 inches) in diameter and allow 8 laps of running time, equaling 500 meters (.3 miles) total.

Races are won by averaging the speed of eight laps compared to the averages of other drivers. The driver decides when his or her car is at its maximum speed, and then the laps are counted from that point forward. Drivers have three minutes to stop the race if they feel their car isn't performing correctly. Each driver is assisted by up to two helpers to start his or her vehicle. To start the car, the driver or a helper pushes it forward with a stick, turning on the fuel switch. Another helper, called the horser, holds the 33-foot (10.1-meter) long steel cable off of the ground until the car is going fast enough to hold the cable up by its own force, which usually occurs around 80 miles per hour (128.7 kilometers per hour) [source: Macropoulos]. To stop the tether car, a broom is used to knock the fuel switch down, shutting off the fuel to the engine.

In the United States, there are only three official tracks still in use. They're located in Whittier Narrows, Calif., Seaford, N.Y., and now there's a portable track located in northern California, too. Protective fences are built around each track due to the extreme top speeds and the tremendous force exerted on the car can cause parts of the vehicle to fly off or break during a race.

Although there are only a handful of tether car members and racetracks across the United States, those involved in the sport are committed to this 70-year-old hobby.

For more information about tether car racing and other related topics, follow the links on the next page.