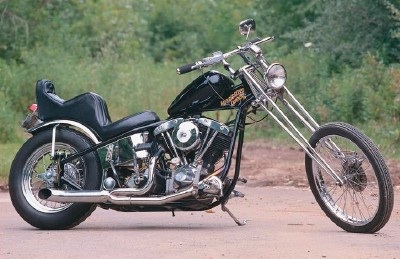 The Mississippi Queen was never a complete Harley.

Although assembled using a lot of Harley-Davidson components, the Mississippi Queen was never a complete Harley to begin with. For one thing, the builder wanted certain features the Milwaukee company never offered to the public.

Primary among the desired features were the front and rear suspension systems. Hardtail frames were the traditional choice, but they were uncomfortable over bumps.

So a Jammer frame was chosen that incorporated a plunger-type rear suspension -- similar to that used on old Indian motorcycles -- providing a bit of cushioned wheel travel. In front, girder forks have a one-piece design, but move up and down on pivoting links.

Harley-Davidson did, however, supply the drivetrain: a 74-cubic-inch "Shovel-

A two-into-one header from Cycle Shack helps the old engine breathe. Power routes to a stock Harley spoke wheel with drum brake; in front, a Hallcraft 21-inch spoke wheel with disc brake was chosen for more of a "chopper" look.

The fuel tank is set back on the frame's top tube, allowing space for a graphics panel carrying the bike's Mississippi Queen moniker. A set of nearly flat drag bars in tandem with a deeply contoured "King and Queen" seat add an appropriate look to a bike built in the Early Chopper style -- which was something never offered by the folks from Milwaukee.

Go to the next page for more photos and details of this Harley-Davidson-powered chopper, the Mississippi Queen.For more information on custom choppers and motorcycles, see: 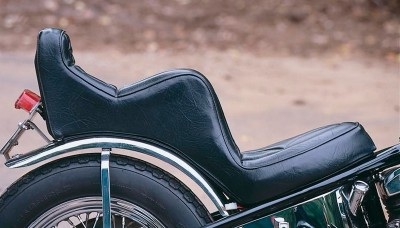 The stepped seat of the Mississippi Queen.

The Mississippi Queen is a custom motorcycle built by Tony Zizzo/Zizzo Racing. Below are more pictures and details of this powerful chopper.

A stepped King and Queen seat is an Early Chopper mainstay, a signature of the breed.

The defining flat handlebars of the Mississippi Queen.

Nearly flat handlebars on risers are another custom touch. This angle also shows the pivoting links of the front suspension. Note the fuel cap, which is frenched into the tank.

The suspension system of the Mississippi Queen.

One of the more interesting aspects of the Mississippi Queen is the suspension system. In front, solid girder forks ride up and down on short, pivoting links at the top. A large coil spring supplies cushioning, but without the aid of a shock absorber, tends to give a bouncy ride.

The advantage of the rear plunger-type suspension is that it looks like a hardtail frame, but supplies at least a little wheel travel -- and that's better than none at all.