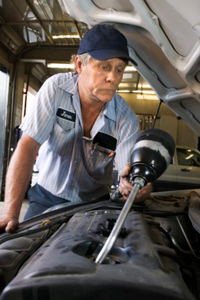 Your owner's manual will let you know what types of oil are best for your vehicle given its mileage, the type of driving you do and even ambient temperatures.
Thinkstock/Getty Images

The challenge in finding the right oil comes when a driver begins to examine the bewildering assortment of oils available on the market. There are different additive packages, viscosities, oils for high- and low-mileage vehicles, extended life and the list goes on and on. Added to the types are ratings from the American Petroleum Institute (API) and Society of Automotive Engineers (SAE) to consider.

The best place to start the selection process is in the owner's manual. The manual will lay out what types of oil are best for your vehicle given its mileage, the type of driving you do and even ambient temperatures.

Before shopping around, however, it's best to understand some basics.

API symbols: The API uses two symbols: The API "donut" and the API Certification "starburst." The "donut" is divided into three parts with the top half describing the oil's performance level, the center identifying the oil's viscosity and the bottom half informing whether the oil has energy conserving potential. Performance levels are illustrated with an "S" for gas engines, and a "C" for diesel. The "S" stands for "service," and the "C" for "commercial." The starburst symbol indicates the oil was tested and met the standards set down by the institute and will function as it claims.

Viscosity: This test, developed by the Society of Automotive Engineers, determines how well the oil flows at 0 degrees Fahrenheit (-17.8 degrees Celsius), and at 212 degrees Fahrenheit (100 degrees Celsius). These tests arrive at the oil's designation, the familiar 5W-20, 5W-30, 10W-30 or 0W-30. Two numbers mean the oil is a multi-grade, tested at two temperatures. There are single-grade oils, but these are generally used for less critical applications, like in lawn mowers.

Type of oil: API approval and viscosity rating are really just the beginning. While oil may be API approved, and the required viscosity, it could be conventional motor oil, semi-synthetic, full synthetic or high-mileage. The owner needs to determine what type they should use. For example, most cars with more than 75,000 miles (120,701 kilometers) could benefit from high-mileage oil, but not always. An owner needs to know other factors, such as how often they changed their oil in the past, whether the engine seems worn and other car peculiarities before they arrive at a final decision.

Additive packages: Oil isn't just oil. Manufacturers add in various chemicals and minerals to change how the oil works within an engine. In high-mileage oil they may add a higher level of anti-wear agents, corrosion inhibitors and seal conditioners to get the most out of an aging engine and keep it running longer.

The next section will deal with each of the variables in depth to allow an owner to puzzle through the (sometimes confusing) world of engine oil.