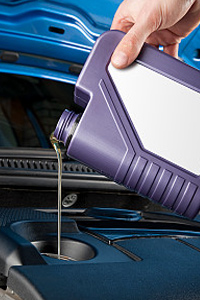 The owner's manual will advise the best viscosity range and the owner can then work within those parameters.
Nicolas Loran/Getty Images

Often times a manufacturer will suggest two or more motor oil viscosities for an engine, such as a 5W-20 or 5W-30, based on several different factors -- including temperature. The reason for this is that engines often need a different viscosity based on operating conditions. Knowing how scientists see viscosity will help an owner determine the best oil for the engine.

Viscosity, at its most basic, is a fluid's resistance to flow. Within the engine oil world, viscosity is notated with the common "XW-XX." The number preceding the "W" rates the oil's flow at 0 degrees Fahrenheit (-17.8 degrees Celsius). The "W" stands for winter, not weight as many people think. The lower the number here, the less it thickens in the cold. So 5W-30 viscosity engine oil thickens less in the cold than a 10W-30, but more than a 0W-30. An engine in a colder climate, where motor oil tends to thicken because of lower temperatures, would benefit from 0W or 5W viscosity. A car in Death Valley would need a higher number to keep the oil from thinning out too much.

The second number after the "W" indicates the oil's viscosity measured at 212 degrees Fahrenheit (100 degrees Celsius). This number represents the oil's resistance to thinning at high temperatures. For example, 10W-30 oil will thin out at higher temperatures faster than 10W-40 will.

The owner's manual will advise the best viscosity range and the owner can then work within those parameters.

With the right viscosity in mind, it's time to start shopping for a type of oil. Most commuters follow the 3-month and 3,000-mile (4,828-kilometer) rule. Frequent oil changes means there's less tendency to need other types of oil than conventional. However some car companies, like Mercedes-Benz and BMW, recommend only synthetic oil in their cars. The following list, as well as the car's owner's manual, will provide a good idea of what type of oil to use. It's also a good rule of thumb not to switch between types. If your car started with conventional, stick with that. If it first used synthetic, be wary about switching to conventional.

Some companies also add viscosity modifiers to thicken the oil, as well as anti-wear additives. We'll discuss those on the next page.