How Hearses Are Built 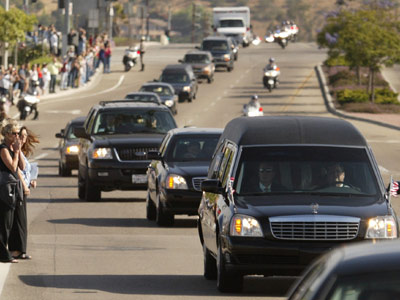 No major American automobile manufacturer builds hearses at the factory. General Motors has no hearse division. Neither does Ford or Chrysler (or, for that matter, Honda, Mazda, or Toyota). Instead, most hearses are hand-crafted by companies that take the bodies of existing cars and customize them, making them longer and adding special purpose parts. Let's look at how this process works.

Although the ambulance industry moved several decades ago to using trucks as their base vehicle, hearse makers prefer to use luxury cars from companies like Cadillac, Lincoln and Buick. To turn a luxury car into a hearse, the electrical system and all vital fluid lines are removed and a circular saw is used to cut the car into two halves, a front half and a rear half. These two halves are then fitted onto a longer chassis, often supplied by the original manufacturer, and overlaid with a molded fiberglass shell that connects the front half with the back half. The shell is painted to match the rest of the vehicle, the electrical system and fluid lines are reattached and now the car resembles what we think of as a hearse. But the custom-build isn't quite that simple.

A number of internal and external features are added in the process, too. A long platform is placed inside to hold the casket. This platform has rollers on top of it so that the casket can slide in and out through the rear doors. Bier pin plates allow the casket to be secured in place so that it won't accidentally roll while the hearse is in motion. Drapes are also placed on the windows that run the length of the coach. These come in two different styles: formal drapes, made from a velvet-like material and hung in arches, like the curtains on the sides of a proscenium-style stage; and airline drapes, which hang straight down for a more modern look. The latter style is the newer of the two styles, having first appeared in the 1950s.

The largest manufacturer of hearses in the United States today is Accubuilt, Inc., of Lima, Ohio. Over the years a number of major hearse makers have merged and are now part of Accubuilt. These include Superior Coach, Eureka, Miller-Meteor, and Sayers and Scovill, names that will be instantly recognizable to anyone interested in funeral coaches. Accubuilt currently builds 60 percent of the hearses used at American funerals. In fact, Accubuilt supplied the hearse for the 2004 funeral of former President Ronald Reagan as well as the limousines for his funeral procession. Other hearse makers include Wolfington Body Company and Binz Hearses. The latter builds hearses on the Mercedes-Benz chassis.

So, how much do handcrafted hearses cost? Well, if you must know, they're in the neighborhood of about $60,000. Like we said earlier, if you have to ask, you probably can't afford one, at least not a new one, anyway. On the next page, however, we'll look at people who are quite happy to buy their hearses used.