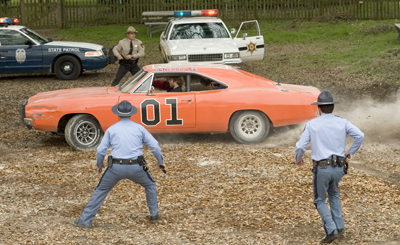 Bo and Luke Duke lived in fictional Hazzard County, somewhere in the southern state of Georgia, with their cousin Daisy and their Uncle Jesse. The Duke family had a long tradition of running illegal moonshine, and as a result, the Dukes were on probation, unable to cross the Hazzard County line. Honest and good at heart, the Dukes often came into conflict with Hazzard County's corrupt law enforcement. The greed-driven Boss Hogg, the bumbling, sputtering Sheriff Rosco P. Coltrane, and the naïve deputy Enos Strate pinned every crime that happened in Hazzard on the Duke cousins, whether they were guilty or not. Every episode had at least one car chase, usually ending with Coltrane half-submerged in a muddy swimmin' hole. Each tale was narrated by "The Balladeer," voiced by country legend Waylon Jennings, who also wrote and performed the show's title song.

Bo and Luke tore around the dirt roads of the rural South in a 1969 Dodge Charger. In the show, the car was found in a state of disrepair in a nearby county, having been used as the getaway car in a bank robbery. With the help of their friend Cooter, the Dukes fixed and modified the Charger to resemble those driven in what was then the NASCAR Grand National circuit (known today as the Nextel Cup). That explains why the doors were welded shut, and why the car had an engine powerful enough to leave all the cops and assorted villains who visited Hazzard in a cloud of dust.

The show's producers wanted a fast, popular car for the show. The Pontiac Firebird and Ford Mustang were both considered, but the Dodge Charger won out in part because it had been very successful in NASCAR, which helped tie it into the story line as well as the show's target audience.

Next we'll learn all about the General Lee itself.

A Dodge Charger By Any Other Name...

Why was the Dukes' car called the General Lee? General Robert E. Lee commanded Confederate military forces in the American Civil War, winning a string of victories until his defeat at the Battle of Gettysburg in 1863. The war raged on for two more years, and Lee eventually surrendered to Union General Ulysses S. Grant in 1865. He was named president of Washington College, where he served until his death in 1870. Lee was considered a hero by many in the South, so the car was named in his honor.

Producers of the show initially planned to call the car Traveller, after the horse Lee rode during the Civil War. But the reference was thought to be too obscure, so the name was changed to the General Lee.