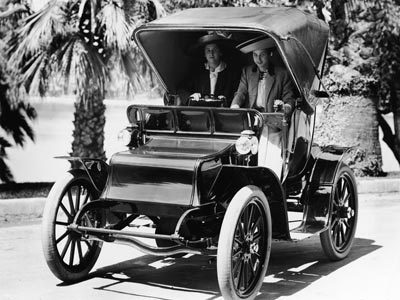 In the late 1800s and early 1900s, the electric car manufacturing industry was relatively robust and successful. In 1900, for instance, out of the total of 2,370 automobiles found in New York, Chicago and Boston, 800 of those cars were fully electric. Surprisingly, only 400 cars were powered by gasoline and the remaining 1,170 were steam-powered automobiles -- popular because at the time steam technology was familiar and proven [source: Sulzberger].

After just a few decades of improvement, electric cars around this time were clean, quiet and relatively efficient. Most resembled horse-drawn carriages, since that's what most automobiles looked like at the time -- a horse cart without the horse. In 1899, there were about 12 manufacturers making electric cars in the United States, and many of the cars were used as cabs in cities where the driving distances were often shorter -- mainly due to the limited charge of the batteries.

Gasoline-powered cars during this time, on the other hand, were extremely noisy and smelled awful. They were often unreliable and had to be started (cranked) by hand, which was actually dangerous because it could lead to some nasty injuries. Fuel efficiency was embarrassing, and cars around this time didn't really support our current notion of eco-friendly driving. But after a short while, the loudness and power of gasoline-powered cars actually became a positive, exotic attribute, and the kinks surrounding inefficiency and hazardous operation were eventually worked out.

One thing gas-powered cars had going for them was speed and range. Major obstacles for the electric car popped up in the form of the search for practical, rechargeable batteries. Even Thomas Edison, the American inventor (and a proponent of electric cars), spent some time trying to improve the electric car's battery. In fact, he was even able to extend an automobile's range to 100 miles. But his battery had its flaws; it was too heavy, easily damaged and expensive. Other battery improvements around the same time typically suffered from a combination of the same setbacks. By the time Henry Ford introduced his Model T, American roads were somewhat better and the demand for long-range vehicles was in place. The internal combustion engine quickly gained momentum and surpassed the electric motor as the popular choice among motorists. The Model T gave the people what they wanted in a reliable and inexpensive package.

However, by no means does the history of the electric car end around the turn of the 20th century. A few electric prototypes emerged during the 1960s and 1970s, and General Motors EV1, the subject of the 2006 documentary "Who Killed the Electric Car?" enjoyed some exposure during the 1990s. Recently, Toyota's RAV4 EV and the Tesla Roadster have caught people's attention, but high costs have made it difficult for either one of these vehicles to reach the mainstream. The three major U.S. automakers have announced plans to produce affordable electric vehicles in the near future, so, who knows? A new story may soon begin.

For lots more information on electric cars, fuel-efficient vehicles and green driving, follow the links below.