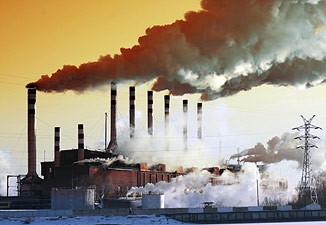 What is the most efficient source of energy?
Thinkstock

Instead of burning fuel like conventional engines, hydrogen fuel cells work through an electrochemical process. To produce electricity, hydrogen atoms are ionized on one side of an electrolyte membrane. While protons slip through, electrons must take the long way around through an external circuit, creating an electrical current as they move. Once the electrons reach the other side and pair off with the protons, the hydrogen combines with oxygen in the air, resulting in a little bit of heat and water as byproducts.

At the basic level, the process is pretty efficient. Depending on the type of hydrogen fuel cell, the efficiency ratio tends to average out around 60 percent of the total amount of energy being released by the process above. However, large-scale hydrogen fuel cells with molten carbonate or solid oxide for their electrolyte membrane can use both the heat and electricity produced for extra efficiency, getting as high as 85 percent. Meanwhile, portable fuel cells like the polymer electrolyte membranes (PEM) used in fuel cell cars get anywhere from 50 percent to 60 percent efficiency, according to the U.S. Department of Energy.

OK, but how does that compare to a regular car? Incredibly well. As cool as it is to run our cars on what basically amounts to controlled explosions and liquid dinosaurs, internal combustion engines are anything but efficient. Not counting time spent idling, energy loss along the driveline, air drag and friction, most gasoline engines lose around 62 percent of their fuel energy just to wasted heat.

The Problem of Production

But there's always a catch when you fiddle around with thermodynamics and energy efficiency. In hydrogen's case, it's a problem of production. Hydrogen may be the most plentiful element in the universe, but unless you feel like dropping by the surface of the sun (bring a cold drink and thick-soled shoes!), you're not going to find the element anywhere for free. Hydrogen here on Earth is always bonded to something, which means it needs to be extracted, a process that's expensive, time-consuming and takes an enormous amount of energy.

However, there's hope. While we still haven't found a viable way to get hydrogen on the cheap, things are getting better. The cost of materials is falling, and there are several potentially easier ways to collect it, like harnessing hydrogen-producing algae and using methane from landfills. A hydrogen-powered future may be in sight, or it's at least a speck on the horizon.