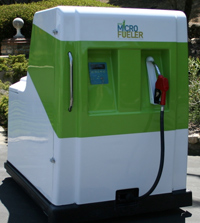 The costs associated with home ethanol production have so many factors involved that concrete numbers are impossible. Here's a guide to the steps of making ethanol so that you can make the calculations yourself:

The government likes to know when and where people are brewing ethanol. To be able to legally distill, in the United States you need to file a permit with The Alcohol and Tobacco Tax and Trade Bureau (TTB). The permit is free. The application is five pages long and takes about a month to process. Authorities can stop by at any time to inspect your still and make sure that you're not drinking the product. While you can make 100 percent ethanol (E100) to run in your vehicle, the best way to assure the authorities that your homemade ethanol is used for fuel is to create a mix of about 4 to 6 percent gasoline per gallon of ethanol.

Ethanol is actually pretty safe to make--some say it's even safer than going to a gas station. If your still is made correctly, everything should be self-contained and well-regulated. That being said, there is always Murphy's Law.­ The best way to stay safe is to remember that the point of ethanol in a combustion engine is to explode -- you should respect that. Following safety instructions is important. Pay special attention when installing vents, timers and over-boil regulators. Most importantly, never smoke near your ethanol still.

Any gasoline engine can run on small amounts of ethanol. If you're going to use large quantities of ethanol (like E85), your vehicle will require an E85 conversion kit. You can buy these kits online from several retailers. They cost anywhere from $100 to $1,000 depending on the technology and how comfortable you are installing them yourself.

The yellow fuel cap on this 2007 Chevrolet Impala lets consumers know they can fill the tank with gasoline or E85.
Chip Somodevilla/Getty Images

Small engines like lawnmowers, hedge trimmers and chainsaws don't need to convert anything to operate on ethanol; however, you may notice a smaller energy output. Some people find ways to get more output by playing with choke valves and fuel additives.

Making your own fuel can have a lot of advantages. These can include tax credits and HOV lane access -- you must display alternative-fuel plates -- to the satisfaction of knowing where your fuel came from. You should always follow the safety instructions, but don't forget to be creative and find ways to incorporate ethanol into more than just your car.

If you want to learn more about making your own ethanol, then follow the links below.