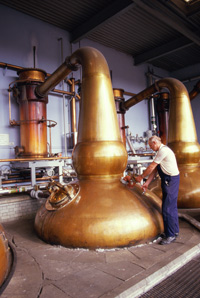 Distillation is really the same process, whether you're working with large or small quantities.
Marcus Brooke/Getty Images

Distillation means taking the fermented ethanol and water mixture and adding heat to separate them -- typically in a still. Since ethanol evaporates faster than water, the ethanol rises through a tube, collects and condenses into another container. The water is left behind.

There are a lot of different kinds of stills, including pot stills, vacuum stills, reflux stills and solar stills, which differ in setup and the way you heat your product. The two most widely used in-home ethanol production units are solar stills and reflux stills. Designs for all of these can be found online, and there are as many different variations for all of them as human innovation will allow. If you have any doubts about the safety or credibility of a particular still, do not attempt to use that design.

One of the simplest and most Earth-friendly distilleries is a solar still. As its name implies, a solar still uses the sun's energy to heat and separate the product. This is the most Earth-friendly design because it doesn't use any other type of fuel, such as wood for a flame or coal for electricity, to make your fuel. The downside to this still design is that it can be inconsistent. It depends entirely on how much sun you get around your house -- and it also makes fairly weak ethanol.

Prior to distilling ethanol, you'll need to have a permit. Keep reading to find out how to get one.