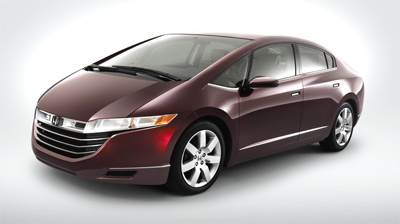 P­ollution reduction is one of the primary goals of the fuel cell. By comparing a fuel-cell-powered car to a gasoline-engine-powered car and a battery-powered car, you can see how fuel cells might improve the efficiency of cars today.

Since all three types of cars have many of the same components (tires, transmissions, et cetera), we'll ignore that part of the car and compare efficiencies up to the point where mechanical power is generated. Let's start with the fuel-cell car. (All of these efficiencies are approximations, but they should be close enough to make a rough comparison.)

If the fuel source isn't pure hydrogen, then the vehicle will also need a reformer. A reformer turns hydrocarbon or alcohol fuels into hydrogen. They generate heat and produce other gases besides hydrogen. They use various devices to try to clean up the hydrogen, but even so, the hydrogen that comes out of them is not pure, and this lowers the efficiency of the fuel cell. Because reformers impact fuel cell efficiency, DOE researches have decided to concentrate on pure hydrogen fuel-cell vehicles, despite challenges associated with hydrogen production and storage.

Next, we'll learn about the efficiency of gasoline- and battery-powered cars.

Hydrogen is the most common element in the universe. However, hydrogen does not naturally exist on Earth in its elemental form. Engineers and scientists must produce pure hydrogen from hydrogen compounds, including fossil fuels or water. In order to extract hydrogen from these compounds, you have to exert energy. The required energy may come in the form of heat, electricity or even light.