How an Engine Lubrication System Works

Browse the article How an Engine Lubrication System Works 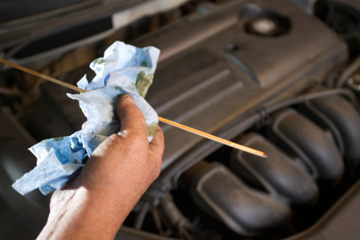 You may know the basics, but do you really know exactly how your car's lubrication system works, where the oil goes and what it's actually oiling? See more pictures of car engines.
Thinkstock/Comstock Images/Getty Images

If you know one thing about car maintenance, you know that you have to change the oil regularly. What you probably don't know is where the oil goes, what the oil is actually oiling, or why it has to be changed all the dang time.

The number one function of oil in the engine is exactly what you'd expect: It keeps things moving. Just imagine the eardrum-piercing sounds of metal pistons screeching up and down inside a dry cylinder. Shudder.

Unlike the ads for various drugs on television, there are several pleasant side effects of keeping the engine lubricated with oil. There's less friction, which means the engine has to make less of an effort to keep chugging along. That in turn means it can skate along on less fuel and run at a lower temperature. And all of this means less wear and tear on the moving engine parts. Keeping clean oil in the system means your engine is happy, which means your wallet is happy. Everybody wins!

Don't be fooled by the word "lubrication," however. Sometimes, when you pull into the bay at your local quick lube shop, they suggest you need a "lube job." That's not an oil change. That's oiling up a squeaky chassis and suspension system, neither of which share oil with the engine lubrication system. "Squeaky Chassis" would make an excellent band name, by the way.

Let's follow Oliver the Oil Molecule on his journey around the engine!

Oil pan: This is where Oliver hangs out when the engine isn't doing anything; the oil lounge, if you will. In most cars, this pan holds about 4 to 6 quarts of oil.

Pickup tube: When the engine is switched on, it needs oil immediately. Oliver and his oil buddies get sucked up by the pickup tube and lined up for action.

Oil pump: The pump does the sucking so that Oliver can slide up that tube against gravity and then pressurizes the oil. Oliver and his little oil friends get jammed in together even closer. Let's hope Oliver remembered to put on deodorant today.

Pressure relief valve: If Oliver and his friends get too close they start to plan a riot, this relief valve gives them a bit of much-needed breathing space. It's the lubrication system's way of saying, "Settle down, kids."

Oil filter: While Oliver and his friends are allowed to pass into the engine, the filter stops any dirt and debris the oil may have picked up on its last pass through the system.

Spurt holes and galleries: Oliver giggles every time he says "spurt holes." He's really immature. These are the little holes drilled in the crankshaft or other parts of the system that allow the oil to coat the bearings and cylinders that need to stay lubricated.

Sump: After doing his job to keep the moving parts of the engine moving, an exhausted Oliver slides all the way down into the oil pan again, also known as the sump, to hang out until he's sucked back up the pickup tube -- and he's back on the job. 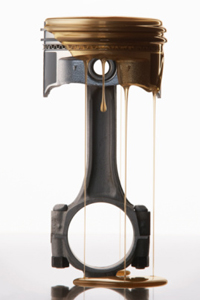 A piston -- or is it a dancer?
Paul Eekhoff/Photographer's Choice/Getty Images

There are basically two types of oil systems in vehicles, both of which sound like types of walruses or something: wet sump and dry sump.

Most cars use a wet sump system. (The more you say it, the weirder it sounds. Wet sump. Wet sump.) That means the oil pan is at the bottom of the engine, and the oil is stored there. Remember Oliver the oil molecule's lounge? It's kind of like he has a table next to the dance floor at the club. And in this strange metaphor, the dancers are pistons and bearings.

The advantage of a wet sump system is its simplicity. The oil is close to where it will be used, there aren't too many parts to engineer or repair, and it's relatively cheap to build into a car.

Some cars, especially high-performance cars, use a dry sump system. That means the sump isn't underneath the engine -- in fact, it can be located anywhere within the engine compartment. After Oliver does his job in the engine, he doesn't just drip into the lounge. He goes to the VIP room away from the dance floor.

A dry sump system gets you a couple of bonuses: First, it means the engine can sit a little lower, which gives the car a lower center of gravity and improves stability at speed. Second, it keeps extra oil from soaking the crankshaft, which can lower horsepower. And, since the sump can be located anywhere, it can also be any size and shape.

Two-stroke engines, by the way, use a completely different type of technology. Scooters, lawn mowers and other two-stroke machines have the oil mixed right in with the gasoline. When the gasoline evaporates in the combustion process, the oil is left behind to do its slick business.

Sometimes you have to do this yourself, measuring the correct amounts before filling the tank. But sometimes, as in most motor scooters, there's an injection system that takes oil from the reservoir and mixes it with the gasoline for you in just the right proportions.

Like lots of automotive journalists, I thought I knew exactly how the lubrication system worked. But when I had to actually write it down, listing each part and how the oil moved through the engine, I realized I only had the vaguest idea of how it all went down. I'm also guilty of talking about wet sump and dry sump systems as if I had a clue. Now that I do have a clue, thanks to my research for this piece, I'll be even more insufferable.

The one thing I did know for sure was that bit about two-stroke engines and mixing the oil with the gasoline. I'm the proud owner of a two-stroke 50-cc scooter with an injection system, so I don't have to premix. Now if I could only find a sidecar for the dog...