Browse the article What is an eLSD? 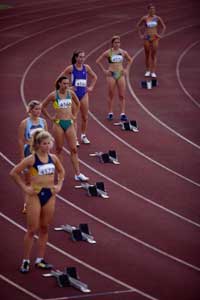 If you find yourself suddenly in the market for a new car, the terminology can often be difficult to follow. Sure, the latest models fresh from the factories look great on the commercials, twisting through the scenic countryside and taking curves on coastal highways as only a "professional driver on a closed road course" can. But then automakers start pulling out the acronyms: XWD? TCS? EBD? If those three threw you for a loop, you might also have problems with this one: eLSD.

This little acronym stands for electronic limited slip differential. Still confused? Well, let's ignore the "eLS" part for a moment and focus on the "D." A differential is a gear assembly designed to allow one wheel on an axle to turn faster than the other one does. To understand why this is necessary, think about the last time you watched a track and field event. When runners race each other around the track, their starting lines are staggered. The closer a runner's lane is to the grassy field in the center, the farther back his or her starting position is. Likewise, the runner in the outermost lane has a start position ahead of all the other athletes. If all the starting positions were lined up side by side, the race would be grossly unfair because the innermost runner would have a shorter distance to run than everyone else would.

Now imagine a car driving around in circles on the same track. The wheels on one side of the vehicle would effectively be in one inner lane while the wheels on the other side would occupy an outer lane. This wouldn't be an issue while the vehicle was driving straight. During a turn, however, the wheels on the outermost side of the vehicle would wind up traveling a greater distance and would therefore attempt to travel at a greater speed. If the same axle connects a pair of engine-driven wheels, making a curve or a turn would cause tension to build in the outside wheel. For this tension to be relieved, one of two things has to happen: The tire skips, or the driveshaft snaps in two.

Open differential gears, the most basic variety of differential, allow each wheel to experience different rotation speeds, essentially splitting the torque two ways with an ­array of interlocking gears. A differential also serves to transfer the motion of the driveshaft to the axle, which intersects at a right angle. For an in-depth look at this, read How Differentials Work.

All right, so we're not quite up to all four letters yet, but on the next page we'll look at LSD.

In "Fear and Loathing in Las Vegas," Hunter S. Thompson rattled off an in-car drug inventory that included five sheets of high-powered blotter acid, or lysergic acid diethylamide (LSD). Don't freak out, but your vehicle may boast LSD as well -- in the form of a limited slip differential. It won't send you on a hallucinatory journey through bat country, but it will help solve some of the problems posed by the more basic open differential.

When an open differential does its job, it ensures the same amount of torque travels to each wheel. The amount of torque actually applied to the wheels is limited by only two factors: equipment and traction. On the equipment side of the equation, you need an engine capable of producing the power and gears up to the task of transferring it. As far as traction goes, the wheel needs to be able to grip the ground without slipping, which can occur on ice, wet roads or even on dry ones if you floor the vehicle at a standstill. But what if only one wheel is on ice or in the mud? You wind up with one wheel spinning freely over the slippery substance, while the other wheel is reduced to the same torque. In other words, you'll have one wheel spinning in the mud and one wheel not rotating at all.

Limited slip differentials use various mechanisms to allow normal differential action during turns, while also solving the problem of slippage. When one powered tire slips, the LSD transfers more torque to the nonslipping wheel. As you might imagine, this makes all the difference between escaping a ditch and having to get out and push. The more common LSDs achieve this with clutches or a fluid-filled housing. To learn all about clutch-type LSDs, viscous couplings and other differential varieties, read How Differentials Work. As with open differentials, some work between two wheels on an axle, while others work along the driveshaft between rear and front sets of powered wheels.

What do you get when you add that lowercase "e" to "LSD?" Well, the adjective "electronic" has signaled the improvement of, among other things, our music, mail and toothbrushes. It has managed the same for our limited slip differentials. 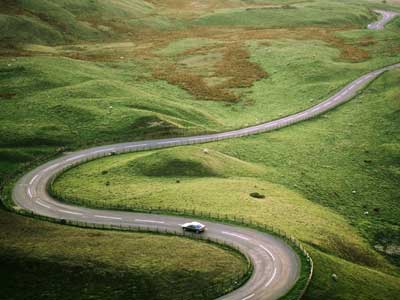 If you love to navigate long, snaky roads through the countryside just like in the car commercials, then eLSDs can provide the stability you need.
Anders Blomqvist/Lonely Planet Images/Getty Images

Finally, we're ready to get right to the heart of the matter: What exactly is an eLSD? It's not the latest trippy, feel-good club drug, and it's not related to any paranormal phenomenon or sports channel we've heard of. No, it all comes down to performing the same tasks as normal limited slip differentials, often with pressurized hydraulic clutches, only with sophisticated electronic fine-tuning.

An eLSD system makes sure each wheel is receiving sufficient torque by use of an electronic control unit, be it microcomputers or the vehicle's main computer. The system electronically monitors input from various wheel sensors and, in the event of slippage, transfers extra torque to the wheel or wheels with the most traction. Some models even allow drivers to choose particular settings for the system,. For instance, Mitsubishi's Active Center Differential allows drivers to choose specific presets for driving on the road, gravel and snow. An eLSD also allows for better handling during high-speed curves and lane changes, performing all the tasks of standard differentials, only with computerized speed and precision.

­An eLSD system can also help with vehicle yaw. If viewed from above, yaw is the vehicle's rotation around its central point during a turn or lane change. In all-wheel drive vehicles, rear eLSD systems help keep the rear of the vehicle closely attuned to the direction of the front wheels, dampening the yaw. If the yaw is severe enough, it can send the vehicle into a spin. For this reason, eLSDs are sometimes referred to as active yaw controls.

So there you have it: eLSD systems are a computerized update of limited slip differentials, providing some of the snazziest vehicles on the market with truly superior handling. Currently, eLSD systems are available in Saab cross wheel drive vehicles, as well as assorted vehicle models from Mitsubishi, General Motors and Jeep. Often, the feature figures into an overall chassis control or electronic stability system.

Explore the links on the next page to learn even more about automobile technology and vehicle handling.

Rise of the Robot Driver

At this point in the article you might be wondering, "Why not just hand the wheel over to computers, too?" Trust us, scientists are working on it. To learn all about this emerging technology and the possible future it may bring, read Will we drive on automated underground highways?, How Self-parking Cars Work and How Driverless Cars Will Work.