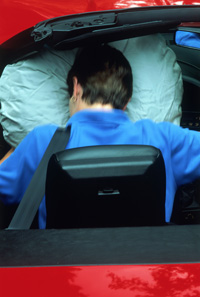 Despite many advances in airbag technology, children are still safest in the backseat of your car.
Patti McConville/Photographer's Choice/Getty Images

There are lots of benefits to having an OCS and dual-stage airbags in your car. They pose less of a threat to children and small adults, and they allow drivers more options for seating their passengers. It also means that airbags will not damage inanimate objects placed in the passenger seat.

That doesn't mean that early versions didn't have their problems. Sometimes the OCS didn't properly sense the passenger, which led to the airbag being turned on or off when the opposite should have happened. Also, some smaller female passengers noticed that the airbag would turn on or off depending on how they sat in the seat, as if the airbag was unable to decide whether an adult or child was sitting there. In other instances, the OCS was overly sensitive -- placing a newspaper in the passenger seat would trigger the airbag to switch on, for example. Hyundai, Jaguar, Jeep, Lexus, Nissan and Toyota vehicles all experienced similar problems, which led to complaints to the NHTSA [source: Edmunds.com].

With time, these problems were largely fixed, and airbags are now safer than ever before. Occupant Classification Systems have made airbags safer and cut down on airbag-related deaths, the NHTSA's Tyson said. "It's worked fantastically. We've gone from a safety system with unintended consequences to one with [no consequences]. We've had no airbag fatalities in recent years."

For more information on OCS systems and other advances in airbag suppression technology, please see the links on the following page.