History of the OCS 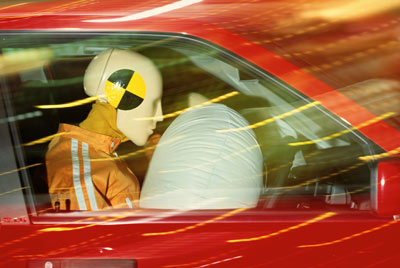 Drivers demand a lot from modern automobiles in terms of safety features. Airbags were placed in cars to reduce fatalities, but early on they experienced problems of their own.

Part of the problem with early airbags was that consumers expected them to replace seatbelts, said Rae Tyson, a spokesman for the National Highway Traffic Administration. "This could not be further from the truth," Tyson said. "The airbag was never meant to be a primary safety device, but a supplement."

Early airbags were overly aggressive to protect these kinds of motorists, Tyson said, which led them to be too forceful and deploy too easily. As such, new systems -- like the OCS -- had to be developed to keep injuries and deaths down. In 2000, the U.S. Transportation Secretary issued a rule requiring that airbags on cars made after 2006 create less risk of serious injuries, particularly for women and children of smaller size. This rule encouraged automakers to use technologies like weight sensors and dual-stage airbags to get the job done.

The rule also required crash tests on vehicles to include dummies of small women and children in addition to average sized men, which were previously the only dummies required. In addition, the law required a way for "low risk" airbags to deploy if a child is sitting in the passenger seat during a crash to keep them from being injured. The mandate also called for suppression of the airbag for rear-facing infant seats and forward-facing child seats, while enabling the airbag for passengers as small as a five feet tall and 110 pounds.[source: National Highway Traffic Safety Administration].

Today, as part of the mandate, systems like these can be found on every new car made in America after 2006. Every system doesn't have to be the same, Tyson said. It's up to car manufacturers to figure out a way to meet the standard. They can do this with several technologies. Modern airbags have advanced a great deal, and carmakers aren't seeing the same problems they saw in the past. Educating motorists to keep kids in the back and to sit away from the airbag deployment zone has kept injuries down as well, Tyson said.

Next, we'll look at the advantages and disadvantages associated with Occupant Classification Systems.