Does tinfoil on your hubcaps bypass police radar? 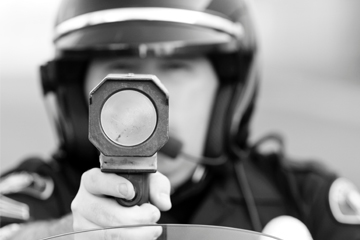 Trying to fool the police is a pastime for some people, but the tricks you learn from urban legends rarely work.
John Roman/Thinkstock

People will try just about anything to fool police, no matter how dangerous or ridiculous it might be. Have you ever seen a car with a CD dangling from the rearview mirror or a row of CDs lined up along the dashboard? The driver of that car might believe that the reflections from the CD will prevent a police officer from getting an accurate speed reading from the radar gun. That won't work, but the reflections from the CDs might succeed in temporarily blinding everyone else on the road.

Another alleged strategy for tricking radar involves the use of plenty of tinfoil. Acting on the assumption that a police officer aims the radar gun at a car's wheels, people have stuffed balls of tinfoil inside the wheels' spokes and wrapped the hubcaps in sheets of foil. The belief is that the surface of the crumpled-up foil will make the radar gun give an inaccurate reading or prevent it from giving a reading at all.

According to Snopes, the most comprehensive urban legend resource on the Internet, this myth dates back at least to the 1980s. And also according to Snopes, it's simply not true. There's not much of an explanation beyond the fact that it's just not true. A police radar gun can accurately read a car's speed even if it's covered in CDs and tinfoil. And assuming the police officer got a suspicious reading? If he or she felt like it, you'd just get pulled over, anyway ... perhaps for littering, as all those balls of tinfoil tumbled out of your wheels and trailed behind you.

This myth does have an air of plausibility, though. Ever hear someone make jokes about a "tinfoil hat?" It's a way to poke fun at people who seem overly paranoid about government spying and the use of electronic equipment for surveillance, as well as potentially harmful effects on health from the use of such techniques. Radio waves, which use invisible electronic radiation to send and receive signals over long distances, are a common method of communication and a source of conspiracy theorists' fears. Since radio waves actually can be blocked by careful usage of certain materials, especially metals, the "tinfoil hat" is said to prevent the government from secretly using radio waves to plant or steal information in a person's brain. In comparison, wrapping a car's wheels in tinfoil to prevent them from being tracked with radio waves seems quite logical, but ultimately wrong.