Can seatbelts kill you? 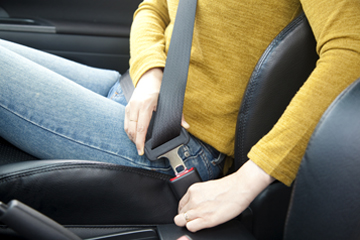 Seatbelts are a way of life for most of us, but some think it's safer to go without them. Could following the rules and wearing a seatbelt actually end up killing you?
Tomwang112/ThinkStock

All cars have them. In 49 states you're required to wear them (New Hampshire is the lone holdout — live free or die!) [source: Governors Highway Safety Association]. If you don't buckle yours, odds are your car is going to give you an annoying reminder chime until you do. Seatbelts are just a way of life. But some people think that going without a seatbelt is safer than wearing it. Some even say that wearing a seatbelt can kill you.

Let's look at the data. Car crashes are a leading cause of death for people age 54 and under in the United States — in 2012, car crashes killed more than 33,000 people. The injury count from car crashes in that same year was a staggeringly high 2.2 million, resulting in $50 million in work loss and medical costs [source: Centers for Disease Control].

Clearly, car crashes are all too common. Here's the key information, though: Of all the people who were killed in car crashes in 2009, 53 percent were not wearing their seatbelt [source: National Highway Traffic Safety Administration]. The CDC reports that wearing a seatbelt reduces your risk of dying in a car crash by 45 percent [source: CDC]. Seatbelts do save lives.

So, why do some people think that seatbelts can hurt you? One common belief is that a seatbelt might trap you in a car that's on fire or underwater. However, car accidents in which the car is on fire or submerged in water account for less than one half of 1 percent of all car crashes [source: Just Drive PA]. When you think about it, wearing a seatbelt greatly decreases your chance of being hurt or knocked unconscious in an accident, which would actually help you escape from a burning or submerged car.

Seatbelts work by holding you in place in an accident, and as a result, yes, they will exert some force in a crash. That force can lead to bruising, but that pales in comparison to the types of injuries you'd face if you were ejected from the car or if you were tossed around inside it. Injuries caused by seatbelts are relatively rare and often the result of improper use. There are some people — like children, very small adults and pregnant women — who do need to take special precautions to make sure they're using a seatbelt safely; but, for most people, it's as simple as hopping in the car, buckling up and hitting the road.