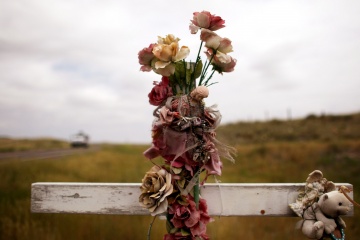 A cross marks the spot in Nunn, Colo., where a person died in a car crash. Memorials like this dot the U.S. Are more of them for teens than adults?
Spencer Platt/Getty Images

All the two sisters and their friends wanted to do was go to the beach. That's what teenagers in Southern California are supposed to do, right? The three girls and two boys, students in the Irvine Unified School District, hopped into a car on a sunny day in May 2013 and headed for the sandy shore. Abdulrahman Alyahyan, 17, a senior at University High School, got behind the wheel of the Infiniti and off they went [source: Flaccus].

According to police, at around 5:20 p.m., the sedan veered off a stretch of asphalt called Jamboree Road, a 55-mph (89-kilometers-per-hour) six-lane boulevard in south Orange County. The Infinity struck a tree with a force so great that the car split, caught fire and ripped the bark off the tree. The accident killed all five passengers. The toxicology report for the driver was clean, and police said speed may have been a factor in what officials described as Newport Beach's worst accident in recent memory [source: CBS Los Angeles].Two of the bodies were so badly mangled that the coroner used fingerprints for identification [source: Flaccus].

The tragic story illustrates the consequences of what can happen when teenagers get behind a wheel. According to the Insurance Institute for Highway Safety, car accidents are the leading cause of death for 13- to 19-year-olds, killing some 3,000 teenagers in the U.S. each year [source: Juva-Brown]. The numbers from the Centers for Disease Control and Prevention offer up similar grim findings: In 2010, seven teenagers a day, ages 16 to 19, died from injuries sustained in motor vehicle accidents [source: CDC].

The simple, horrific truth is that teens are more likely to die in car accidents than older drivers. In fact, teenage drivers, ages 16 to 19, are three times more likely than drivers 20 and older, to be involved in a fatal crash, says the CDC. Among that group, male teens were two times more likely to die in a car crash than females [source: CDC]. In 2011, 4,347 teen drivers, ages 15 to 20, were involved in 10 percent of the 43,688 fatal crashes in the United States [source: NHTSA].

Why are the statistics so grim? We'll dig in next.

Too Much Alcohol and Speeding, Not Enough Experience 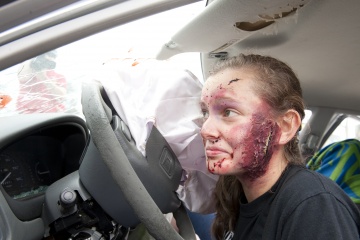 They were college freshmen, best friends, together since kindergarten. Then, early one morning in February 2006, Jessica Rasdall and Laura Gorman, once inseparable, parted in the most horrible of ways. It began with a trip to the clubs; drinks; a walk to the car; a turn of the key. Less than an hour later, Gorman was dead, and her BFF, was charged with killing her [source: Goldberg].

The story is all too familiar: teens drinking and driving. Although underage, Rasdall and Gorman had no trouble doing shots in the Ybor City section of Tampa, a historic district that teems with bars and restaurants. According to reports, the girls were drinking at one of the clubs and left at 3 a.m. for the 40-minute drive home. At some point, the car swerved from Interstate 275 and slid down a hill, slamming into a tree. Gorman died of her injuries, and Rasdall received 400 stitches to close up a gaping wound in her head. Authorities took a blood sample and found that Rasdall was one-and-a-half times over the legal limit [source: Goldberg]. (For Florida drivers over age 21, the legal limit is 0.08; drivers under 21 face stiff penalties with a level of 0.02 or higher.)

Drinking and driving is one of the leading causes of death for teen motorists. In 2011, 24 percent of young drivers (ages 15-20) involved in fatal car crashes were drinking, and 26 percent had a blood alcohol content of 0.08 or greater, according to the National Highway Traffic and Safety Administration. During that same period, the agency reported that 28 percent of young male drivers involved in fatal car wrecks were drinking, compared to 16 percent of female drivers.

Drinking and getting behind the wheel isn't the only factor that determines why teenagers are more likely to die in a car accident than older drivers. According to the CDC, most teens just don't have the experience. They don't allow enough room between the front of their car and the back of the vehicle ahead of them. Teens are also more likely to underestimate dangerous situations than older drivers [source: CDC].

Teens are also more likely to speed. In fact, speed plays a major factor in fatal car accidents. In 2010, 39 percent of male drivers between 15 and 20 years old who were involved in fatal crashes were speeding at the time of the accident [source: CDC].

Although the statistics involving teen drivers and fatal car accidents are appalling, the number of teens killed on American highways has decreased significantly since 2002. From 2002 to 2011, driver fatalities among 15 to 20 years old declined from 3,838 to 1,987, a reduction of almost 50 percent [source: NHTSA].

Experts say there are several ways for teens to become safe drivers. One of the most effective methods has been the graduated driver licensing (GDL) program. The program is a three-stage process that teenagers must go through before receiving their driver's license. The first, or "learner," stage involves supervised driving with an adult for six months or longer. The second, or "provisional," stage, involves unsupervised driving with certain restrictions, such as a prohibition against driving at night. The final stage involves unrestricted driving. The goal of a GDL program is to provide young, inexperienced drivers with more supervision during their first few months on the road than they normally would have [source: AAA Foundation].

Fifty states and the District of Columbia have some version of a GDL program. The results have been amazing. According to AAA, some states have reported a 34 percent reduction in the number of personal injury accidents among 16-year-old drivers, and a 19 percent drop in fatalities. Across the U.S, fatal crashes have dropped by between 6 and 11 percent for drivers 15 through 17 [source: AAA Foundation].

Minimum drinking age requirements have also slowed the death trend. One study suggests that minimum drinking age laws, which make it illegal for anyone under the age of 21 to buy or possess alcohol, have led to an 11 percent drop in alcohol-related fatalities. Moreover, the study, by the Pacific Institute for Research and Evaluation, found that states that have stringent laws against fake IDs reported a 7 percent drop in alcohol-related fatalities among drivers younger than 21 years old.

While the numbers are decreasing, more work needs to be done. At least society is on the right road.

Author's Note: Are teens more likely to die in a car accident than adults?

When you're a teenager, all you can think of is getting your driver's license. While driving is a rite of passage, it is also a responsibility. Consider these facts when your teenager asks for the car keys. Researchers say that teen drivers who say their parents set rules and pay attention to what their children do are half as likely to be involved in a motor vehicle accident. Teens who can drive whenever they want are more than twice as likely to be involved in a crash as opposed to those who share a car. Safe driving, it seems, is everyone's business.