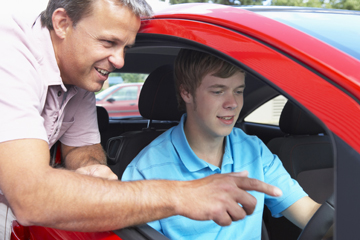 How can you tell when your teen is ready for solo driving? See small car pictures.
Hemera/Thinkstock

Most parents of teens face at least a little anxiety at the thought of their babies behind the wheel. It's not unfounded: Car crashes are the No. 1 cause of death for U.S. teens, and the risk is greatest in the first six to 12 months of driving alone [sources: McBride, Teen Driver Source]. But watching them drive off is practically unavoidable. For most kids, driving is a major step in the quest for independence.

So it's a good thing for teens to learn to drive, and the risk has been decreasing since states began implementing mandatory practice hours and a slower progression from learner's permit to full licensure. Looking at first-year drivers, some states have seen 40 percent fewer fatalities since they started graduated driver licensing (GDL) programs [source: Teen Driver Source]. Still, no matter the hours of practice, it's hard to know what kind of driver your child will be without you around. Is he paying more attention to his friends than to the road? Is she speeding in a rain storm? Or texting behind the wheel, which carries up to a 23-fold increase in crash risk for all age groups [source: Texting and Driving Safety]?

Tons of supervised practice and meeting all state regulations are a good start, but developing real driving readiness is not a one-size-fits-all process. Ultimately, it's up to you to gauge whether your teen is prepared to operate a vehicle safely while you're not watching. A lot of that determination is subjective, but following some guidelines can help you make the right choice -- and maybe feel slightly less anxious the first (or 50th) time you watch your kid drive off alone.

Or worse, with three friends in the car, music blasting, and french fries in his lap.

But first things first: Alone, with no distractions, how prepared is your child to deal with the myriad hazards of the road?

While not to be relied on exclusively, state requirements do help considerably in getting your teen ready to drive solo. All 50 states have some variation of graduated driver's licensing, or GDL, which eases drivers through stages of increasing independence behind the wheel.

After the initial, supervised learning stage and the restricted, intermediate stage, you may feel confident your child knows the rules of the road and can drive well under normal conditions. What he or she lacks, however, is experience. Experience is the key to safely navigating unexpected or complex road conditions [source: Teen Driver Source].

To evaluate higher-level skills, take your teen out driving at night, in bad weather, in heavy traffic, through construction zones, and on highways to practice navigating on-- and – off ramps (especially ones with tight turns), merging, and changing lanes at high speeds.

Basically, if a maneuver makes you a little tense when you're driving, practice it a lot with your child at the wheel.

A few skills deserve special attention. A 2011 analysis of serious accidents involving teen drivers showed that a deficit in three areas accounted for nearly 50 percent of the driver-error crashes: lack ofscanning, or assessing the car's surroundings to see possible problems before they occur; notreducing speed to accommodate dangerous road conditions; and being distracted by something in the car or outside it[source: Children's Hospital of Philadelphia].

While adults certainly get distracted, too, some traits of adolescence make kids more susceptible. Safe driving practices in general are not always well-supported by the teenaged brain.

Teens and Cars No Longer in Love?

As GDL programs became the norm in the U.S. (starting in the late 1990s), the numbers of teen drivers began dropping. In 1983, 46 percent of 16-year-olds held driver's licenses. In 2010, just 28 percent had licenses. Many teens seem to be waiting until they pass 18 so they can go straight for an unrestricted license. The high costs of gas and insurance, and the ease of getting rides from family and friends, were also cited by teens as reasons for not getting driver's licenses [sources: McBride, Linn].

You could say bad driving is in the teenage brain – or more specifically, the prefrontal cortex, which is responsible for "executive functions" like problem-solving, multitasking, planning, impulse control, and attentiveness. This area of the brain doesn't fully develop until the early 20s, which means a 16-year-old driver simply does not operate like a 30-year-old driver would [source: National Institutes of Health].

That doesn't mean your teen can't be ready to drive alone. It does mean you need to take special care to assess your child's maturity level before handing over the keys. A few questions to ask yourself (and discuss with your child) are [source: Bosari]:

These questions overlap, and you may not have all the answers. These are traits to watch for, though, in the months leading up to an intermediate or full driver's license, because they help indicate your child's overall capacity for good judgment. A child who respects the rules, has a track record of resisting peer pressure, and understands the risks associated with driving – and, of course, has excellent driving skills -- is a good candidate for going it alone.

Still, even the most responsible teen driver embarks on a high-risk first year on the road. And while you may not always be there to watch and advise, there are steps you can take to reduce the likelihood of an accident.

If you decide your child isn't quite ready to go it alone, try to make it a discussion. When he or she stops slamming doors, explain how you arrived at your decision and what exactly you're looking for, and work together to lay out a plan for reaching the goal, including scheduled practice times and reassessments.

Tips for Helping Teens Be Safe 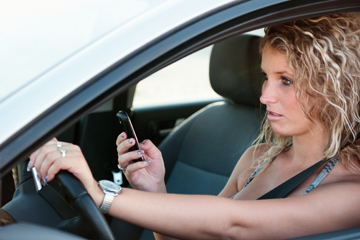 Among the rules to set in your teen-parent driving agreement is no texting or talking on the phone while driving.
iStock/Thinkstock

As with so many other parenting practices, the best thing you can do for your teen driver is establish who's in charge (that's you). In this case, you're looking at two main approaches: Establishing driving rules and controlling access to the car [source: Teen Driver Source].

"Controlling access" essentially means your teen does not have a car. A 2009 study published in the journal Pediatrics found that over the course of one year, teen drivers who shared a family car were half as likely to be in a car accident as those who had their own [source: Shute]. So consider holding off on adding another vehicle to your roster (or else just hold on to the keys).

When it comes to the setting the rules, it can be helpful to draw up a parent-teen driving agreement. This is a document, signed by you and your child, listing the terms of your teen's driving privileges – the rules your child must follow both on and off the road, and the specific consequences of breaking them. Ideally, you'll draft it together, which makes it more likely the rules will be followed [source: Teen Driver Source].

The most common rules are obvious ones, like always wearing a seatbelt, never driving under the influence, obeying traffic laws and never texting while driving. Off the road, your teen may have to maintain certain grades and/or contribute a certain amount toward the car insurance.

Some other important considerations include [source: CDC]:

Finally, there is the high-tech approach. You can, in fact, know exactly what kind of driver your child is when you're not around. Electronic monitoring is available in many forms, including GPS-based apps and in-car units that tap into a car's computer diagnostics. They can let parents know, sometimes in real time, when their kids speed or slam on the brakes. They can be notified when the car is in use after curfew or stops at an unplanned destination. Some systems even provide in-car video and sound [source: Doheny].

If you add this to your overall plan – it's a supplement, not a solution – your teen may be exasperated but it may also decrease her likelihood of speeding, indulging in distractions, and becoming a statistic [source: Doheny].

Whatever safety plan you settle on, remember to review it together periodically, and consider making changes as your teen becomes a more experienced driver. The goal, after all, is independence.

Author's Note: How to Tell When Your Kid Is Ready to Drive Alone

My first thought when I saw the title of this article was, "It's easy. Look for 30 candles on her birthday cake." I myself was a terrible teen driver, and I dread the day my daughter gets her license. In the course of my research, though (and it is amazing how many teen-driving resources are out there), I did start to feel somewhat less helpless about it, because I learned that my parents, wonderful as they were and are, did a lot of things "wrong" in this context. I came away understanding that their choices about my driving may have affected my choices behind the wheel. And my choices may affect my daughter's. So I hope this article leaves anxious parents feeling more empowered – and nonchalant ones more afraid. It is nothing short of a miracle that I made it to 17.