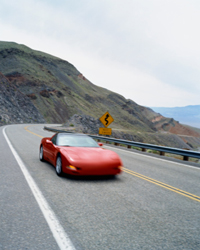 When the wind pushes you off-course at speed, there's no time to make a correction.
Tom McGhee/Workbook Stock/Getty Images

You know how when someone sets a speed record, officials will note along with the time if there was a wind at his or her back? Like maybe the driver got a little extra something out of it? Well, if a little wind is good for sending the needle around the speedometer, a lot is probably awesome.

If you can see the storm coming, with black clouds on the horizon and maybe some flashes of lightning, you're golden. You're going to out-drive the storm. Pay no attention to the fact that your car has 115-horsepower on a good day, or that it's an ancient diesel Volkswagen bus that can't out-run a newborn kitten. You've got this!

The danger here -- not that you're afraid of danger -- is that when the wind pushes you off-course at speed, there's no time to make a correction. Wherever the wind says you're going, you'll go there. Also, any corrections you attempt to make will tend to be over corrections, sending you in the opposite direction very fast. So, go for it!