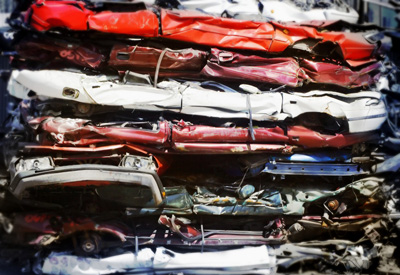 For every beginning there's an end. Every shiny new car on the showroom floor will one day end up in a junkyard, its value no greater than the weight of the metal used to build it. North American auto plants built 15.8 million cars in 2005 -- all of which have to end up somewhere [Source: Business Week]. One of the most important stops an old car reaches at the end of the line is the crusher -- a massive machine whose only purpose is to compress a car into a tiny cube or flattened slab.

In this article we'll learn what a car crusher is, how they crush and why take the time to turn a car into a brick of steel.

A car crusher is a piece of machinery used to compress the metal remains of a junked car after it has been stripped of all useful parts. Compressing them takes up less space when stored, or when transported via truck or train to a recycling facility. A crusher is just one step of the auto-recycling process. They can also be used to compact other forms of metal waste, such as old appliances or even large machines like combines.

Crushers can be portable or stationary. Older machines tend to be stationary -- once they're set up in a scrap yard, they stay there. Today, most crushers are portable. They are built mounted to a standard-size truck trailer, and can be towed to various locations, set up, used to crush some things, then moved somewhere else. This helps cut costs for auto salvage yards - instead of buying an expensive machine, they can split the cost with other yards or rent time on a crusher that comes by once a week.

How Does a Crusher Crush? 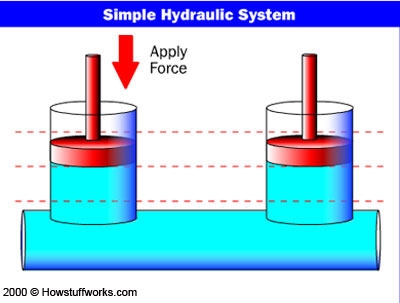 Almost all modern car crushers use a hydraulic press to crush the cars. A large motor powers a pump that pushes hydraulic fluid to drive large cylinders. Using principles of force-multiplication, a hydraulic system can generate over 2,000 psi and impart more than 150 tons of crushing force onto a pile of scrap cars. For more details on hydraulic systems, read How Hydraulics Work.

In a "bale" crusher, another set of pistons pushes another crushing plate in a lateral direction. Once the car has been crushed flat, it's crushed sideways, forming a "hay bale" of compacted car. Some baler crushers use specially shaped "claws" that fold the cars into bales or square logs. You can view this diagram showing how this works.

In addition, an oil reclamation system sits below the crushing bed. When motor oil and other fluids drain from the crushed car, they run down into this system where they are collected and stored for later recycling. 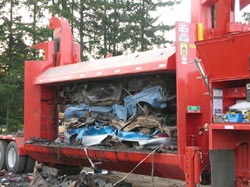 A car crusher in action
Photo courtesy of Can-Am Recycling

There are other kinds of crushers, such as hammer crushers, which use huge plates or protrusions on spinning wheels to smash whatever is being crushed into bits. However, these are used most often in industries that are crushing rocks. Auto recyclers might use them to render scrap metal into smaller pieces, but this is rarely the first step in the recycling process for a car.

Some stationary crushers use a large electromagnet on a lifting arm to "grab" metal cars and drop them into the crusher. Shredders also use magnets to separate steel parts from non-ferrous materials.

Car crushers must be made with thick, hardened steel. The material has to be tougher than whatever it is they're crushing. This toughness is the reason that some of the original crushers made in the 1970s are still operational today.

The basic function of car crushers hasn't changed much since they were invented in the 1970s. Improvements in car crusher design focus on two areas: ease of use, and set-up and crushing speed. Older crushers needed more than one operator, and setting up and tearing down a portable crusher could take a lot of time. New crushers have automatic push-button set-up and can be easily run by a single operator. Faster crushers mean more cars crushed per minute, and the more efficient a crushing operation is, the more money the crusher's owner can make.

Once a car reaches the junkyard, it goes through several steps before finally being shredded to scrap metal.

Granutech's Big MAC portable crusher needs about 45 seconds per car, and can crush four or five cars at a time. Overbuilt's Model 10 crusher is built with a higher clearance on the bed, allowing trucks and buses to be crushed, or six cars at one time. A special hydraulic system that allows rapid transfer of hydraulic fluid increases overall crushing speed [Source: American Recycler].

It's something everyone ponders, if only for a moment, when they see a car crusher in action: what would happen if a person were actually in the car when it was crushed? That horrific thought has lead to the car crusher used as a murder weapon, means of body disposal or a simple yet effective threat in countless films and crime novels. The James Bond movie "Goldfinger" and the remake of "Gone in 60 Seconds" are just two examples. But has it ever really happened?

In the annals of crime history, it's likely that someone, somewhere was murdered by being put through a car crusher. The fact is, especially in the case of a baler crusher, a crushed body is pretty hard to find. In one case, a scrap yard owner in Wellingborough, England put the body of a man he had shot to death through a car crusher, and the remains were never found [Source: BBC]. Perhaps many more people have met their end in a car crusher than crime records indicate because the perpetrators were never caught. 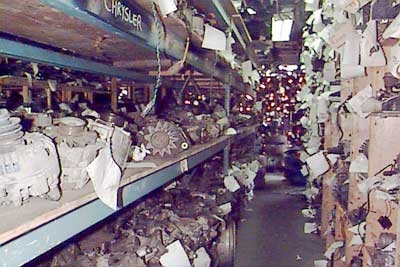 Parts for resale after being stripped from a car.
Photo courtesy of Cooksville Auto Recycling

Why do we need to crush cars? The most obvious reason is so they take up less space. But why are we scrapping, shredding and junking cars to begin with? Recycling cars is a lucrative business, and it makes environmental sense.

The sale of reusable salvage from old cars is only a small piece of the auto recycling pie. About 65 percent of a junked car is made from steel (the rest is made from other metals plus glass, rubber and upholstery). The price for scrap steel and iron, though volatile, often hovers around $250 per ton. Expanding economies in Asia have lead to greater demand for scrap steel, bolstering the market worldwide. With 14 million tons of steel from cars being scrapped each year contributing to an industry-wide total of 76 million tons of recycled steel and iron, it's easy to see that auto recycling is a multibillion dollar industry [Source: ISRI].

Recycling metal uses about 74 percent less energy than making new steel, according to the Environmental Protection Agency. Recycled steel is cheaper as well, since new ore doesn't have to be mined to produce it. All steel produced today has at least 25 percent recycled steel in it, and some products are made entirely from recycled steel. So in addition to the economic and environmental benefits, recycling cars is a vital link in the world's industrial infrastructure.

Once cars are crushed, they're shipped off to a recycling center where they are shredded and separated into small pieces, which are then sorted into various metals. The largest shredder in the world is used by Sturgis Iron & Metal of Elkhart, Indiana. The machine is so big, it isn't measured in tons, but acres. It uses an 8,000-horsepower electric motor to drive a massive rotor that spins hammers at 175 mph, reducing six pre-crushed cars per minute into fist-sized metal chunks [Source: Buffalo News]. The shredder is so powerful, the hammers must be turned or replaced almost daily because of the wear and tear they receive, and it sits on special dampeners to prevent seismic vibrations in the surrounding area.