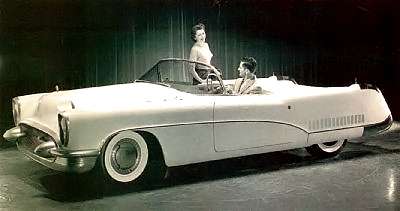 The fiberglass-bodied 1953 Buick Wildcat that starred at the 1953 Motorama should have b­een destroyed, per General Motors edict. But dream car collector Joseph E. Bortz somehow located that long-missing show car and restored it to its past glory.

During the 1950s, "dream cars" popped up with the frequency of the annual model change. General Motors started the whole trend with the Buick Y-Job, a Harley J. Earl design that dated back to 1938 and predicted the styling of the 1942 Buick.

By 1953, General Motors was the master at whetting the public's appetite for dream cars via its annual Motorama show. This was the first time it traveled to various cities, and it gained tremendous publicity for General Motors. Although the corporation generally referred to its futuristic show cars as "experimental automobiles," the public called them dream cars, and General Motors also did so on occasion.

Whatever the term, General Motors obliged the curious by fielding a raft of cars for the 1953 Motorama. Kicking off at New York's Waldorf Astoria on January 16, the show later toured Chicago, Miami, Los Angeles, San Francisco, Dallas, and Kansas City.

The 1953 Buick Wildcat's front bumper predicted that of the 1954 Buick.

Best known among the cars shown in 1953 was the fiberglass-bodied two-seater Chevrolet Corvette. It made such a mark that it was in production (in small numbers) by July 1 in Chevrolet's Flint, Michigan plant. Also seen that year was the Oldsmobile Starfire, a sleek four-passenger convertible that was to lend its name and certain styling elements to production Oldsmobiles beginning in 1954.

Cadillac fielded two cars, the Orleans, a basically stock production model that was converted into a four-door hardtop, a body style that would become reality in 1955. The Cadillac LeMans, a two-passenger "sports prototype" convertible on a 115-inch wheelbase, featured fiberglass construction and carried styling that previewed the 1954 models.

Pontiac took a different approach with the Parisienne, a "town car" with a formal roofline and an open section over the chauffeur's area. Although based on the 1953 Chieftain, the 1930s body style was more a trip into the past than the future. Also seen in 1953 was the Firebird I, a jet plane on wheels that would see future renditions at subsequent shows.

A partially stripped Wildcat is in the beginning stages of restoration.
Note the "Roto Static" hub, which remained stationary while the wheels revolved.

Buick, of course, was not about to be left out. Its contribution was the Wildcat, a two-passenger convertible that Buick referred to as a "Trial flight in Fiberglass and steel." It was also billed as a "Prototype of future cars." And, indeed, it was both.

A special brochure handed out at the Motorama explained the philosophy behind the Wildcat: "Buick by-passes time and tradition to bring your 'dream car' closer. Buick's progressive search for finer styling and better cars for America's motorists enters a new era with presentation of the revolutionary new sports convertible -- the Wildcat -- featuring a Fiberglass body.

"Adoption of easily-molded Fiberglass for the bodies of Buick experimental models shortens the time between new styling ideas and their incorporation in cars that can be tried and tested. And presentation of these futuristic models for public view -- as in the case of the Wildcat and XP-300 -- affords an opportunity to 'pre-test' the motorists' reaction to various styling features incorporated in those cars."

For more on the styling of the Buick Wildcat, continue to the next page. 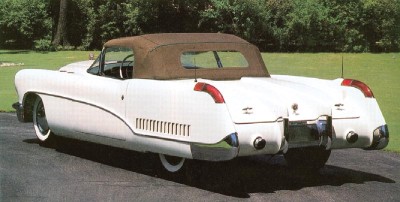 The side sculpturing of the production 1967-1968 Wildcats borrowed from the 1953 Wildcat.

Buick hastened to point out that the 1953 Buick Wildcat was experimental, "as the name implies." A number of styling innovations were touted: "concave grille and buffer bombs integrated with a massive wrap-around front bumper, twin hood scoops that provide additional air for the carburetor, fender-top vent ports, and the slim sweepspear inset on a line from bumper to bumper.

"Separate from the body, but distinctive in its own right, the front wheel disc design features 'Roto Static' hubs that remain stationary. The functional purpose of this design is seen in the air scoop that is built in to provide additional brake cooling. Cooling of rear tires and brakes is heightened by a series of louvers in the fender panels.

"In keeping with its jet-styled lines, the Wildcat is powered by the world's most advanced V-8 engine, the same record high-compression Fireball V-8 that gives the 1953 Roadmaster and Super such outstanding performance among America's finest cars.

The 1953 Wildcat engine's finish is reminiscent of a Duesenberg S, and chrome was used generously.

"Converting the Wildcat's magnificent power into whip-quick getaway with perfect smoothness at every pace, Twin-Turbine Dynaflow provides this experimental Buick with the finest automatic transmission ever built for an automobile."

The Wildcat's interior featured a large "banjo" steering wheel and green leather upholstery with one-inch vertical pleats. Leather covered the doors and the double-rolls of the instrument panel.

A horizontal speedometer rode atop four circular gauges that were partly recessed into the lower roll of the panel. In the center was a foot-operated Selectronic radio, unique in that it was round (twin tail-fender antennas were automatic); to its right was the clock.

The green leather interior of this 1953 Wildcat had deteriorated badly and needed replacement.

Windows and seat operated hydraulically. When the top was down, it fit neatly into a recess behind the passenger compartment. Although the top was manual, the flush-fitting fiberglass panel covering it was powered, and eliminated the need for the traditional fabric boot.

Like the later Wildcats of the 1950s, some styling elements from the Wildcat I (as it is generally called) found their way to production Buicks. For example, the Panoramic windshield debuted on the 1954s, although not in Plexiglass as on the Wildcat I. The headlight treatment looked a lot like that used on the 1953 and 1954 cars, sans the "V."

The grille and bumper design was also adapted for the 1954 models, although the vertical grille bars were convex in production and not as deep. The side-sweep was similar in spirit (if not exactly in detail) to the Wildcats of 1967-1968. Curiously, the taillight design was more akin to the 1949 Buicks than anything that would follow.

Many enthusiasts have long assumed that the Wildcat I was consigned to the scrap heap years ago. It was General Motors policy to destroy show cars after they had served their purpose -- liability insurance considerations were a concern.

The fiberglass body of the 1953 Wildcat was stripped of paint and redone as part of the restoration.

Another factor was that a lot of dream cars hadn't been properly tested, and so they simply couldn't be driven on public roads. They were intended to look good under the spotlights of a car show, but often even the most basic functions were sometimes absent. Some didn't even have working engines or transmissions.

Thus, it's hardly surprising that show cars were routinely destroyed. Nonetheless, a few escaped the crusher, mainly because some insiders, generally designers and engineers, managed to sneak through "work orders" to sign out their favorite cars. General Motors didn't approve of these back door goings-on, of course, but old car fanciers are the richer for it now.

To learn more about one Wildcat that escaped its date with destiny, see the next page.