Is the end of the month really the best time to buy a car? 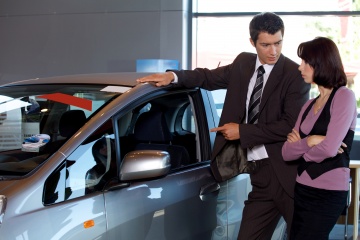 If you’re visiting the car dealership on the last day of the month to get the best deal, you might want to hold off for a day or two.
IPGGutenbergUKLtd/iStock/Thinkstock

Traditionally, car shoppers were told that buying a car at the end of the month was the best strategy to save some cash. It's common knowledge that car salespeople and car dealerships must meet quotas. These quotas affect nearly everything that happens on the sales floor: the salesperson's pay and bonuses, the dealership's bonuses and how the manufacturer feels about the dealership, which in turn affects how many cars the dealership is allocated.

In other words, a salesperson who doesn't meet quota might not be able to pay rent. A dealership that doesn't meet the quota might get stuck with a showroom full of slow-selling and unprofitable models instead of more desirable cars. Savvy car shoppers who were aware of the quota system knew that if they picked the last couple days of the month to try to make a deal, the salesperson would probably be desperate to make a deal.

The problem is, this isn't strictly true. That's because even though dealerships work with quotas, and those quotas motivate everything they do, dealerships do not work strictly on a calendar month. When we flip the page on a calendar to start the next month, a car dealership still has a couple of days of leeway to sell cars and count them toward the previous month's quota. Go too early (right at the end of the calendar month) and your salesperson might not be quite desperate enough to get you the deal you want. Go a day or two too late, and you might not have any negotiating power at all. Trying to time your purchase to the first day or two of the month might be the best bet.

This information doesn't align with the most often-repeated new-car-buying wisdom, so it might be most convincing to let the numbers speak for themselves. TrueCar, a website that analyzes car sales data, revealed that buyers who completed their car sales in the first two days of the month save an average of $390 over buyers who bought during the rest of the month [source: Tuttle].

What's perhaps even more surprising? TrueCar's analysis shows that buyers who drove off the lot on the last day of the month paid an average of $843 more [source: Kronenberg]. Keep in mind, that doesn't necessarily mean that the same car will cost more on the last day of the month as compared to the first day of the following month. One possibility for the disparity is that at the end of the calendar month, salespeople might focus on steering customers into more expensive, feature-heavy models instead of prioritizing the number of units sold.

So one bit of car-buying wisdom that hasn't changed? When you go into a dealership ready to buy, have a firm idea of what you want, and walk away if the salesperson tries to change your mind.