How to Buy a Fuel-efficient Car

by the Auto Editors of Consumer Guide
NEXT PAGE
Image Gallery: Hybrid Cars 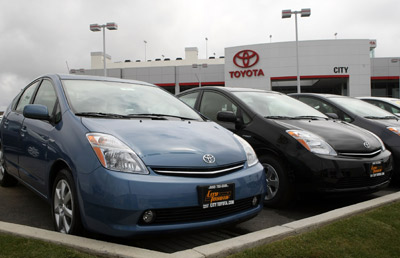 From the mid-1970s to 1990, the average fuel economy for all vehicles on the road in the U.S. doubled from about 14 to 28 miles per gallon (mpg). By 2005, it had dropped to 24 mpg. Driving a fuel-efficient vehicle will save you money on gas, of course, but such a decision has other, broader, effects.

Nature required more than 200 million years to develop all of the oil below the earth's surface. Mankind required just 200 years to consume half that. If current rates of consumption continue, the U.S. Department of Energy says the world's remaining resources of conventional oil would be exhausted in 40 years.

About 60 percent of the oil the world consumes powers transportation vehicles, and half goes to passenger cars and light trucks. It's little surprise that the United States, the world's leading economic engine, also imports and consumes more oil than any other nation.

Whether America's oil consumption is disproportionate is a terrific subject for debate, one we won't engage here. And whether the world has 40 or 140 years of oil left, the reality of the market is this: As oil resources dwindle and oil becomes prohibitively expensive to locate and extract, mankind will replace petroleum as a primary source of power because alternative forms of energy simply will be more economical.

Still, burning less gas in our vehicles will affect the pace at which oil is consumed. In this article, we'll discuss how you can do your part by buying a fuel-efficient car, including how to compare various makes and models. We'll even give you tips on how to evaluate miles per gallon and how to look for air conditioning and other features you want with the best available fuel economy.

Even more important, fuel conservation will impact the demand for oil. And that has meaningful political, technological, and environmental consequences.

Transportation accounts for two-thirds of U.S. petroleum use, and in 2005, America depended on imports for 55 percent of its oil, the highest percentage ever. As domestic resources are used up, that dependence on foreign oil will increase. Some 70 percent of the world's oil reserves are in the Middle East, under control of the OPEC oil cartel.

In the past, the dependence on oil has had a profound effect on the U.S. economy. The Department of Energy calculates that oil-price shocks and price manipulation by the OPEC cartel from 1979 to 2000 cost the U.S. economy about $7 trillion-almost as much as we spent on national defense over the same period, and more than the interest payments on the national debt.

With increasing world dependence on OPEC oil, future price shocks are possible. Each major oil price shock of the past 30 years was followed by an economic recession in the United States.

One camp insists technological progress holds the solution to oil dependence. Our attention should be on developing energy-efficient vehicle technologies and developing fresh energy sources to replace petroleum cleanly and inexpensively

Another approach places an emphasis on conservation. Curbing our demand for petroleum will help reduce U.S. oil dependence and provide an incentive for auto manufacturers to produce cleaner, more energy-efficient vehicles.

In any discussion of the environmental responsibility shouldered by the United States, it is important to recognize that the U.S. accounts for 25 percent of the world's economic output.

That said, here goes: More than one-third of the oil shipped by sea is destined for the United States. Air pollution is a worldwide problem, and the U.S. is the largest emitter of manmade greenhouse gases, accounting for 20 percent of all manmade greenhouse emissions. Reduce demand for imported oil, and less will be shipped by sea, with the prospect of fewer oil spills.

Transportation vehicles produce most of the key chemicals that pollute the air, causing smog and health problems. Air quality is poorest in developing industrial nations, but 133 million Americans live in areas that fail at least one National Ambient Air Quality standard. Vehicles with higher fuel economy may produce less pollution over time than vehicles with lower fuel economy.

Global warming is also related to automotive exhaust emissions. Greenhouse gases trap heat and contribute to global warming by keeping a significant percentage of infrared radiation from escaping into space. The concentration of greenhouse gases, especially CO2, has increased substantially since the beginning of the industrial revolution. Natural greenhouse effects contribute to global warming, but the National Academy of Sciences says the increase over the past 150 years is due in large part to human activity.

But, says the Environmental Protection Agency on its Web site, citizens can also do their part to help reduce climate change by purchasing a vehicle with higher fuel economy.

MPG and Your Wallet

The Auto Editors of Consumer Guide® road test more than 200 new cars, trucks, minivans, and SUVs per year. They drive these vehicles the way their owners would: urban commuting, suburban shopping, and highway travel. We keep scrupulous fuel-economy records on each vehicle.

In real-world driving, the 8-cylinder SUVs tested average about 13 mpg in city/highway driving. The average is about 15 mpg for 6-cylinder SUVs and minivans, and about the same for most luxury cars. The typical midsize car tested gets approximately 22 mpg, the typical 4-cylinder compact car, about 25 mpg.

According to the American Automobile Association, the average price for a gallon of unleaded regular gas nationally in September 2004 was $1.84. By August 2005, it was $2.33. By September 2005, in the weeks after Hurricane Katrina, the pump price for regular was $3.04.

For the same points in time, the AAA says the national average for a gallon of premium-grade gas was $2.02, $2.56, and $3.34. No one can predict the future cost of a gallon of gas, but these figures show price volatility is a near certainty.

Owners keep a new vehicle an average of seven years. The typical American vehicle racks up about 12,000 miles per year. Using the real-world fuel-economy averages as recorded by Consumer Guide®, and the average price of gas as of September 2005, here's an idea of how much each of these types of vehicles would cost to fuel at 12,000 miles per year.


Rising fuel costs are a concern for everyone. In the next section, we'll discuss those rising costs and how they affect us all.