How the Bugatti Veyron Works

Browse the article How the Bugatti Veyron Works 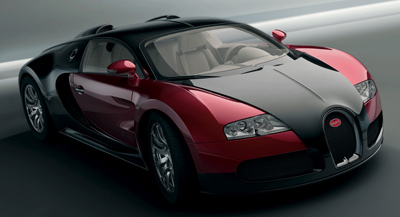 How would you define the most amazing production car in the world? Would it be:

At the moment, the Bugatti Veyron appears to have it all:

In this article, we will take an in-depth look at this amazing automobile and see how it is possible to fit so much performance into a single machine. It all starts with the engine...

The Bugatti Veyron is a car built around an engine. Essentially, Bugatti made the decision to blow the doors off the supercar world by creating a 1,000-horsepower engine. Everything else follows from that resolution.

So let's start with the engine. How would you begin the design process for an engine this powerful? If you have read How Car Engines Work, you know that if you want to create a 1,000-horsepower engine, it has to be able to burn enough gasoline to generate 1,000 horsepower. That works out to about 1.33 gallons (5 liters) of gasoline per minute.

We need a 16-liter engine to burn 1.33 gallons of gas per minute. That actually makes sense -- the engine in the Dodge Viper is 8.0 liters in displacement and produces 500 hp.

But there's a problem: A 16-liter V-8 engine would be very large. And the pistons would be massive, so there would be no way it could turn at 6,000 rotations per minute (rpm). It might turn at a maximum of 2,000 rpm, meaning that you would need an immense 48-liter engine to generate 1,000 hp. Clearly an engine that big is impossible in a passenger car.

So how did Bugatti fit 1,000 horsepower into a passenger car? Let's find out. 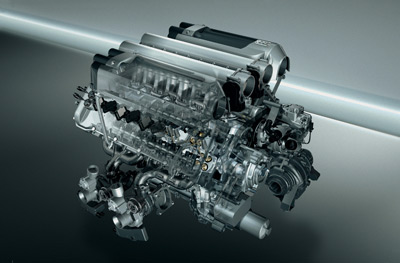 The Bugatti Veyron's 16-cylinder monster engine produces 1,001 horsepower for a top speed of more than 250 mph. And it's a passenger car. Check out the Bugatti.
Photo courtesy Bugatti Automobiles S.A.S.

Bugatti did two things to create a compact engine capable of producing 1,000 hp. The first and most obvious thing is turbocharging.

If you stuff twice as much air in each cylinder, you can burn twice as much gasoline. In reality, it's not quite a perfect ratio like that, but you get the idea. The Bugatti uses a maximum turbo boost of 18 PSI to double the output power of its engine.

Therefore, turbocharging allows Bugatti to cut the size of the engine from 16 liters back down to a more manageable 8 liters.

To generate that much air pressure, the Bugatti requires four separate turbochargers arranged around the engine.

The second thing Bugatti engineers did, both to keep the RPM redline high and to lower lag time when you press the accelerator, was to double the number of cylinders. The Bugatti has a very rare 16-cylinder engine.

There are two easy ways to create a 16-cylinder engine.

The latter technique is, in fact, the way Bugatti created its first 16-cylinder cars in the early 20th century.

For the Veyron, Bugatti chose a much more challenging path. Essentially, Bugatti merged two V-8 engines onto one another, and then let both of them share the same crankshaft. This configuration creates the W-16 engine found in the Veyron. The two V's create a W. You can see exactly how this looks in a set of beautiful videos available on the Bugatti Web site (click here for instructions on how to access the videos).

Then, Bugatti started piling on features to make the engine even better... 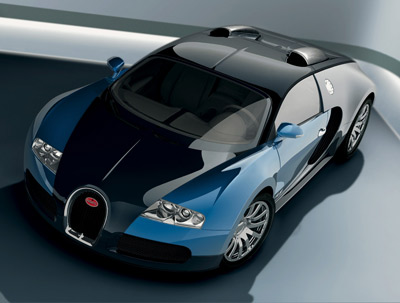 The special features of the Bugatti W-16 engine are amazing. For example:

Everything about the engine is superlative.

In order to harness all of this horsepower and torque, you need an amazing transmission...

The transmission is unique, in particular because it has to harness about twice as much torque as any previous sports-car transmission. It has:

This computer-controlled system is identical to the sort of system found in a Formula 1 car or a Champ car. There is no clutch pedal or shift lever for the driver to operate -- the computer controls the clutch disks as well as the actual shifting. The computer is able to shift gears in 0.2 seconds.

It would be almost impossible for all of the torque available from the W-16 engine to flow out to just two wheels without constant wheel-spin. Therefore, the Veyron has full-time all-wheel drive. By applying the engine's power to all four wheels through a computer-controlled traction-control system, the car is able to harness all of the engine's horsepower, even at full acceleration.

See Audi: Quattro for an explanation of the Quattro all-wheel drive system. See also How Differentials Work and How Four-Wheel Drive Works.

How much gas is that? 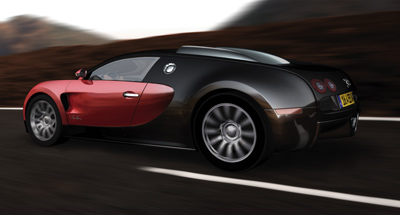 According to one of the Veyron's designers, the biggest challenge in creating the Veyron was the aerodynamics. How do you keep a 250-mph passenger car on the road?

An F-1 car or a Champ car can travel at 250 mph or more, but they have a uniquely designed body, a single driver lying in a reclining position, just an inch or so of ground clearance and an aero-package made up of large wings to generate massive downforce. The Bugatti, on the other hand, is trying to look like a normal car and seat two passengers.

The underside of the Veyron, like an F-1 car, is streamlined and venturi-shaped to increase downforce. There is also a wing in the back of the Veyron (see below) that extends automatically at high speed to increase downforce and keep the car glued to the road. According to Popular Science: Hypercar, "With the moving tail spoiler we've got enough downforce now, about 100 kg (221 pounds) at the rear and 80 kg (177 pounds) at the front at top speed."

If you look at the above photo, you'll notice two snorkel-like devices, one on either side of the engine, on the roof of the car. The Veyron uses these to manage airflow. The Veyron has three reasons for managing airflow:

You can see how the Veyron handles these requirements in the photo below. The engine of the Veryon sits behind the driver, so roof-mounted snorkels, the rear-deck vents and side-mounted scoops bring air to the engine and rear brakes.

The size of the engine and transmission, along with the four-wheel-drive system and the four drive shafts, along with the opulence of the passenger compartment (discussed in the next section) and the car's oversized dimensions, all add weight. Even though the body is sculpted in carbon fiber to minimize its mass, the car weighs in at about 4,300 pounds (1,950 kg). For comparison, a Dodge Viper weighs about 1,000 pounds (454 kg) less.

In the next section we'll look at the tires and interior.

The Tires and Interior

Even the tires for the Veyron are unique. They're specially designed by Michelin to handle the stress of driving at 250 mph. The tires need to be sticky like a race car's and able to handle 1.3 G's on the skidpad. However, they also need to last longer than the 70 or so miles of a typical race tire.

The tires use the Michelin PAX system. Their pressure is monitored automatically, and they can run flat for approximately 125 miles (201 km) at 50 mph (80 kph). According to Michelin, the run-flat detection system "plays an integral role in active safety in PAX System. Its role is to inform you of a loss of pressure, either gradual or sudden." Once warned of an air leak by the PAX system, you can reduce your speed and head toward a tire repair center.

One advantage of the PAX system and its run-flat ability is that it eliminates the need for a spare tire.

The Veyron seats two in lavish style. The interior is swathed almost completely in leather -- the dash, seats, floor and sides are all leather. Only the instruments and a few metal trim pieces interrupt the leather experience.

The car also surrounds its occupants with every sort of electronic nicety, including a remarkable stereo system, navigation system, etc.

Is all of this worth a million bucks? Who knows. But regardless, the Veyron represents a remarkable technological achievement.

The Veyron is also likely to represent the far end of the automotive performance spectrum for some time to come. To create a car much faster will require adding even more weight, and delivering even more power to the wheels. The added weight means diminishing returns in the power-to-weight domain. Additional power means more wheelspin.

Look at a Champ car and consider how radical its appearance is compared to a passenger car. Consider also that a Champ car does not go much faster than the Veyron. The Veyron probably approaches the outer limits of the passenger car envelope, and we are unlikely to see much beyond the Veyron in terms of performance.

This is, in other words, as good as it gets.

For more information on the Bugatti Veyron and other high-performance luxury cars, check out the links on the next page.