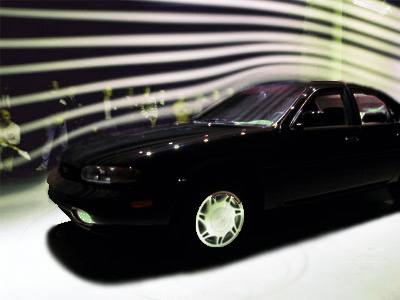 ­Today's fleet of cars is a vast improvement over the ornamental tailfins and boxy structures of yesteryear. The modern, curvaceous designs minimize the force that air creates against the car's motion, and the result is a sleeker, faster car. Because speed is, obviously, the main factor in NASCAR races, aerodynamics is a crucial element in stock car design.

Aerodynamics is the study of how air moves -- especially how it interacts with solid, moving objects. Just as a speedboat leaves the sharp line of a wake trailing behind it on the water, an automobile creates an aerodynamic impact as it slices through the air.

Automotive designers and NASCAR teams rely on aerodynamic principles to create improvements in the power and handling of vehicles at high speeds. Passenger cars have become more shapely over the years as manufacturers discovered how streamlining can increase fuel efficiency, allowing a car to travel at the same speed using less horsepower. These designs reduce air resistance, or aerodynamic drag.

­In the world of auto racing, it might be more important to augment the downward force the air exerts on the car's wheels. This downforce is the key to maintaining traction through the tight and constant turns of a short-track race.

The discovery of the mysterious powers of downforce in recent decades sent the auto racing world into a frenzy of wind-tunnel testing and subtle tweaking of stock car bodies. It has changed the culture and practice of car racing in ways some fans find infuriating. NASCAR has had to step in and carefully regulate the aerodynamic features of each vehicle in competition to keep a level playing field.

­Even casual fans are constantly exposed to the terminology of automotive aerodynamics. This article will demystify NASCAR lingo, starting with the phenomenon of aero push.

A speeding stock car pierces the air as it travels. Air swooshes over the top of the car and is deflected by the spoiler attached to the rear deck. If another car trails immediately behind, nose to tail, it continuously enters airspace affected by the car in front.

­The trailing vehicle, if it tailgates at a certain proximity, can take advantage of the lead car's aerodynamic force. The air behaves as if the two cars are one. The displaced air behind the lead car creates a partial vacuum that sucks the trailing car ahead at an increased speed, or at the same speed with reduced engine effort and lower fuel consumption. This is called drafting. Both cars can travel faster than either car can go by itself [source: Turner].

Drafting can be a very powerful racing technique, but it has a serious liability. The trailing car suffers a reduction of downforce on its front tires, resulting in a loss of stability and handling coming out of turns. This is aero push, also called a "tight" condition, requiring the trailing driver to ease off the accelerator to regain traction [source: ESPN].

Aero push forces drivers to make careful calculations. On the one hand, many drivers can remain competitive in a close race by piggybacking on the lead vehicle, taking advantage of the increased force and decreased engine strain. The effects are especially beneficial on straightaways. At the corners, though, the dangers come into play in reduced maneuverability and greater likelihood of losing control.

Aero push has become almost the dominant feature of NASCAR races. Fans have complained that racing has lost some of its appeal, as riders remain in fixed positions for long stretches at a time. Drivers challenge each other less, riding in tight single-file rather than side by side. On the positive side, a greater number of vehicles can stay near the leader of the pack.

Aero push -- and all of racing aerodynamics, for that matter -- is all about the downforce.

Air on the Air

Downforce is a downward force produced by air pressure, which creates a stronger pressure between the tire and the surface of the road. The principle involved is the same as the one that gives lift to airplanes, but in reverse.

Aerodynamic force results from differences in pressure on the sides of the moving object. The most common methods for increasing the downforce of a vehicle involve reducing the air pressure underneath the vehicle.

For the most part, any increase in downforce will also bring an accompanying increase in aerodynamic drag. For the speed demon, more drag means lower speeds on the straightaway But more downforce means better handling on turns since the tires grip the track more securely.

­Automotive engineers and pit crews strive to keep the two forces in balance. On a track like Daytona, with its long straightaways and banked, sharp corners, the designs tend toward keeping drag to a minimum. For short-track racing, the strategy is reversed -- because the driver spends more of the race negotiating curves, an emphasis on downforce will lead to greater overall speed as well as increased safety [source: Tierney].

Attaining more downforce by manipulating racecar bodies is an obsessive task in the stock car business. Perhaps the best place to start is at the nose of the vehicle. A properly angled nosepiece, placed low to the ground, directs the majority of the air upward over the top of the car. The objective is to create a low-pressure area, or partial vacuum, underneath the nose [source: Circle 304].

The wheel wells are another area to shape. A flared wheel well opening, in front of the tire, will force onrushing air away from the sides and bottom of the car, further decreasing the air pressure [source: Boone, "Race Car Aerodynamics"].

For all of the technological prowess devoted to building up downforce behind the front wheels of the stock car, it's critical to consider balance. The back of the car must have its share of downforce to handle properly.

Side skirts -- long horizontal pieces running low along the side of a vehicle -- were developed in car racing as a way to reduce air pressure underneath and gain downforce. But this exterior feature could be knocked off the vehicle, resulting in a sudden loss of downforce and high probability of an accident [Source: Cislunar Aerospace]. Many racing authorities have banned side skirts, but they remain a flashy feature of certain passenger cars [Source: BMW].

­The wings of a bird or an aircraft are the most obvious producers of lift. But lift doesn't necessarily mean an upward force countering gravity. In fact, downforce is a form of lift -- negative lift.

Lift is the aerodynamic force perpendicular to the direction of the body in motion. Conversely, drag is a resisting force parallel to, but coming opposite from, the moving object. Lift -- colloquially called a skyward force -- is usually present to one degree or another in a moving object. Because lift and downforce are opposing forces, part of the effort to build a stock car with a strong downforce involves overcoming lift.

­The engineering goals are to curtail the amount of air flowing underneath the chassis to ensure a closer attraction between the tires and the ground and to provide easy escape for air that does get underneath.

Stock cars are characteristically designed with rake -- meaning the car's rear is higher off the ground than the front end of the chassis. It keeps the pressure underneath the car down, preventing lift.

Spoilers, front air dams and wings produce this effect. An air dam is mounted underneath the front bumper to block air flow underneath the body. Wing appendages, used on Formula One and Indy cars, are turned upside-down to provide downforce instead of lift.

Race cars occasionally become airborne despite these devices. The danger is especially present when a car is spinning, which radically alters the aerodynamic forces in play. During a high-speed spin, air can move rapidly enough over the roof and hood to produce a powerful lift force.

Several safety innovatio­ns are installed on NASCAR vehicles for such emergencies, such as a recessed right-side window. Stock cars circling oval tracks to the left are more likely to show their right face in a spin. The sharp edge to the right-side window deflects air instead of letting it flow freely over the roof. Flaps recessed into the car's roof, another safety feature, begin to rise if air pressure suddenly drops above the car, blocking air flow [Source: Leslie-Pelecky].

If you're curious about aerodynamics, do further research on the Internet or at your local library. A 2008 book called "The Physics of NASCAR: How to Make Steel + Gas + Rubber = Speed," by Diandra Leslie-Pelecky, explains aerodynamics and other scientific principles in auto racing.

Aerodynamic drag is the force of air along the length of the traveling car, opposing the car's force. As the car cuts a path through the air, some air molecules collide with the front bumper, producing resistance.

­Other molecules flow along the hood, only to come up against the windshield -- another source of drag. The air that glides smoothly over the roof grows turbulent above the rear window and behind the car, exerting a backward force on the vehicle.

Speed, air density, and car size, shape and design all determine the magnitude of a car's drag force.

Drag is the major obstacle to acceleration and racing speed. A passenger car driving on the highway spends an estimated 60 percent of its energy overcoming air drag, a far greater percentage than tire friction and the energy needs of the drive train itself [source: Beauchamp].

Defeating drag was the first major focus of automotive aerodynamics, beginning in the 1960s. It is still the most important variable in racing conditions that place a smaller premium on downforce, such as longer tracks with more straightaways.

The sleek lines, tilted windshields and rounded corners of modern race cars -- and passenger cars for that matter -- are designed to minimize drag. But the quest to engineer racecars with high net downforce sometimes leads to additional drag. The rear spoiler found on NASCAR vehicles is a case in point: It increases drag by distributing weight from the front to the back of the car [source: Circle Track]. Aerodynamics remains a vibrant and young field of engineering, with many innovations still to come down the road.

To keep up with the latest innovations in aerodynamics, visit the links on the next page.

Ordinary drivers needn't worry about the downforce of their vehicles, but passenger cars can reduce drag by lowering the chassis, adding an air dam, wheel well and hood fairings [source: Beauchamp].