Browse the article What are the rules of stock car racing? 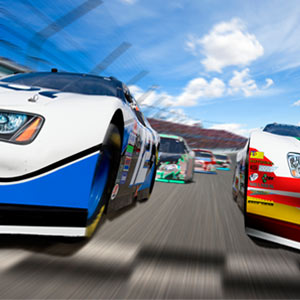 ­Imagine soaring down the road in your Chevy Impala SS, or maybe your Toyota Camry, leaning heavy into the turns. You've drowned the needle in the red, nearing 200 mph now -- as fast as these cars go. Then, zoom, zoom, zoom! A ­metallic flash, then another, then one you can barely even see glides by before a fold of black and white drops just ahead. This is stock car racing, and you've just been lapped at the final flag.

Since the 1930s, stock car racing has cruised into fans' hearts worldwide, as the biggest spectator sport in the U.S. [source: Appalachian State University]. Every circuit, small-town track and league has its own rules, meaning there is no one-size-fits-all answer regarding stock car racing rules. This article focuses on NASCAR, as it's the most recognized name in stock car racing. There are other large leagues, like the Sports Car Club of America or the Champ Car series, that work under similar but different rules [source: Seattle Sports Commission].

­Founded in December of 1947 by Bill France Sr. as a means of unifying racing rules, the National Association for Stock Car Auto Racing launched in Daytona Florida two months before its first officially sanctioned race took place on Daytona's beach course, forever setting the pace for racing history [source: NASCAR]. Today, NASCAR rules govern the top national series: The Sprint Cup, the Nationwide and the Craftsman Truck Series, all of which are held nationwide. No matter the location for these races, the winner, or the fan turnout, one thing remains the same: With fast speeds and human lives on the line, the need for safety and rules remains.

To make sure fans get what they want and drivers get out alive, NASCAR has implemented certain safety requirements, penalties and flags to alert the drivers and crew chiefs to changing conditions and other issues. To win a race, and accumulate the points needed to qualify and move on, racing teams have to follow these rules and know their flags.

Read on to learn how to decipher stock car racing flags.

Green means go. Ask any kid riding shotgun or maneuvering his Mario Kart down a televised track. We all know that green signals allow the flow of traffic to continue, and with stock car racing, this is no different. There are red and yellows flags too, much like the colors regular drivers are used to seeing. However, you might not be as familiar with these other stock car racing flags:

­Got it? Good. We're waving the green flag so you can read on to learn about stock car racing requirements.

Red, White and Blue: The other racing flag

At the start of each American race, one flag gets more attention than any of the others, as race tracks salute the American Flag in honor of the country and roots [source: NASCAR]. A pledge to diversity and respect for the nation and its armed forces is one of the foremost aspects of NASCAR, something fans, sponsors and teams can agree on at the end of the day [source: American Veteran Awards].

Ask a sports fan, and he or she can tell you that a favorite player looks OK just by looking at the driver. However, in NASCAR, teams of inspectors scour every inch of a winning car in open inspections after a race to make sure any adjustments made to that car are legal. In both NASCAR and amateur racing, teams make modifications on everything from windows to rear spoilers and anything in between. And just as many regulations are created by officials to ensure racer safety. These regulations are complicated because they vary by level, series, track, year and even vehicle type.

­Whether it's a Friday night at a local track like the South Sound Speedway, or the Craftsman Cup Series, there are regulations on car bodies, engines, suspension, wheels and tires, and limits can't be shortened or exceeded. At South Sound Speedway in Washington State, for instance, spoiler height is limited to 10" for street stock races, and only 6-1/2" in the "limited late model" category [source: South Sound Speedway]. NASCAR, by comparison, went to a 4-1/4" spoiler in 2005 [source: Home Depot].

A mandate was set in 2007 that all NASCAR Nextel Cup cars essentially be the same except for the engine. The only differences fans now see between team cars are the paint job and maybe a minor body tweak here or there [source: Stewart] As with all regulations, this vast change has been made to ensure safety, but also to cut costs and reduce technological advantages one team might have over another. Now, every chassis and roll cage unit built must go through a NASCAR inspection, where roll cage joints and the driveshaft construction are compared to the new specs. If they're off, they can be fixed, but later on, points can be docked and standings can be altered.

If you're interested in more potential penalties, read on.

Speedways aren't the only home to racing rules and regulations -- sometimes even the courts have a say in the sport. In 2005, the Kentucky Speedway took NASCAR and the International Speedway Corporation (ISC) to court, claiming the two entities -- both controlled by the influential William France family --conspired to host the major NASCAR races at ISC-owned tracks. The suit was a challenge to antitrust laws that prevent monopolization in sports. The Kentucky Speedway claimed it lost $600 million because it was shut out of the major races [source: Sports Business Daily]. In 2008, the court ruled against the Kentucky Speedway, saying that NASCAR is allowed to host races wherever it chooses.

In early 2008, Dale Earnhardt Jr. lost a spoiler. It didn't blow off-it was confiscated by NASCAR officials for being illegally altered [source: Spencer]. At the same time, officials snatched David Reutimann's carburetor because of an illegal boost that could up his horsepower [source: Jenkins]. From fuel additives to a mid-race release of buckshot to lighten a car, any alteration you can im­agine has a penalty to match, from a simple black flag, to confiscation fines and even suspensions.

­In NASCAR, the ruling body is the National Stock Car Racing Commission. For local races, racers can be penalized with something as simple as the black flag or as severe as being asked to park the offending car, surrender points and sit out for the season. In June 2008, the Commission doled out probations, suspensions and fines of $100,000 to the HAAS CNC Racing team for "improper mounting" techniques [source: NASCAR]. With a plethora of penalties and fines, drivers and crews have to understand many rules.

When points are lost and fines are levied, teams might feel the pinch in the wallet, but the real price comes in the loss of points. And when everyone from the owner to the driver and the crew and car chiefs in between can be penalized, racing really is a family affair [source: Finney].

Specific rules are updated every year in August but it's in section 12-4-A of the rules, the catchall "actions detrimental to the sport of racing" where most infractions occur [sources: Borden, Demmons]. This section has covered just a few of the penalties that can be levied -- with more than 100 pages in the rulebook, there are quite a few more.

For additional information on stock car racing, visit the links on the next page. ­

NASCAR grew out of a colorful history, when drivers would race any old car down country roads, often for gas money or maybe even to ply moonshine [source: Howell]. One of the legendary crew chiefs was Henry "Smokey" Yunick, who would try almost anything to get his team's car to victory [source: Caraviello]. Yunick stored extra gas in the car's frame, put a basketball in the gas tank to fool capacity regulations, and experimented with aluminum and fiberglass car parts to try to lighten the weight of the car [source: NASCAR].