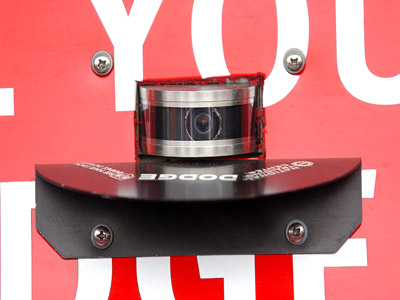 Who knew that such a small camera would provide so much fun for race fans?
Rusty Jarrett/­Getty Images

­Before the advent of the in-car camera, NASCAR drivers were shrouded in mystery during races. They were hidden behind helmets, the glare of the Southern sun and the cars' thickly padded roll cages. Their only communication with the outside world (or crew chief) came through two-way radios.

NASCAR coverage would change forever in 1983, when the first in-car camera made its debut during the Daytona 500. The RaceCam, as it was called, was a miniature, remote-controlled camera that sent a signal to a helicopter hovering over the track. The helicopter sent the signal to a trailer where the feed was processed and sent out to America's televisions.

­That first camera was carried by NASCAR legend C­ale Yarborough's car, who also became the first driver to win a race with an in-car camera. The camera caught also several other, not-so-appropriate moments: Veteran driver Dick Trickle was famously caught using his car's functional cigarette lighter to light up during a caution lap in the late 1980s. In the decades since, fans have become used to hearing the driver speak with his or her crew during the race and watching him shift through the gears as he or she enters and exits turns.

Technology kept pace as the sport grew in popularity in the early 1990s. In-car cameras were mounted in more cars and could be found in more places: the roof, the bumpers, the axles, and aimed along the side panels. In 2007, race coverage took another step into the future when ESPN debuted high-definition in-car cameras in the NASCAR Nextel Series.

After 25 years of practice, the race teams and camera tech teams have figured out the ideal setup for all these cameras. We'll explore that on the next page.

­Over the years, cameras have been mounted almost every place on a race car that you could think of. Racers in the mid-'90s even experimented with infrared brake cams that showed the home viewer how hot NASCAR brakes could get on corners. Since then, the three-camera setup has become pretty standard.

The three cameras used almost universally in modern NASACR races are located on the rear bumper, the roof and in the cockpit of the cars. This last in-car camera is often called the "doggie cam," since it's in the position that might be occupied by man's best friend, if he'd only wear a helmet and keep his head inside the race car.

­The race teams themselves don't install the cameras. There are teams of camera technicians employed by the network broadcasting the race who've got the process down to a science. It involves drilling holes in the exterior panels and interior dash for the cameras' brackets and wiring. The installation and hookup takes about a half an hour per car.

For years, camera crews and crew chiefs have debated the cameras' effect on the cars. In the 1980s, only three races had been won by cars carrying cameras: two by Cale Yarborough, one by Geoff Bodine. To even the playing field, cars without cameras carry dummy weights, which quiets (but doesn't quite eliminate) the complaints of the crew chiefs.

Since the teams don't own the cameras, at the end of the race, the cameras come off as quickly as possible before the car is packed into the trailer. The same crews that install the in-car cameras remove them and pack them up for the next week.

­Let's look at who gets these in-car cameras actually put into their cars.

Where Do They Go?

While the roof, rear bumper, and "doggie cam" are the most popular places to put a camera, they aren't the only places a miniature camera can be mounted. If they can convince the crew chief, techs like to put cameras on the front grille, or in the footwell where fans can see the driver's heel-toe technique.

Choosing a Car for the Cameras

­With a typical field of NASCAR Nextel Cup race cars numbering 40 or more, how does a team get selected for the honor (or the hindrance, depending on your point of view) of receiving the in-car camera?

­It's a pretty easy decision to make, actually. Broadcasters and fans alike want the cameras on the popular drivers at the tracks where they do well. If a driver has won or placed in the top ten at Dover International Speedway's Monster Mile every race for the past five seasons, that driver's pretty much guaranteed to get a set of cameras on his or her car next time it comes up on the schedule. Alternately, if a driver excels at road courses like Watkins Glen in New York, that driver will get cameras aimed at him or her as he or she turns both right and left in the twisties.

Being good at a particular track or type of race sometimes isn't enough: Cameras most often end up in the cars of points leaders in the series. At the end of the season, when the top five or so drivers are racing for the Nextel Cup, those with the best shot at the big prize will likely have cameras in their cars.

Like everything else in NASCAR, the cameras are sponsored. Usually, the car's sponsor will buy an advertising package from the broadcaster that includes the in-car cameras. Once in a great while, an advertiser without a car in the race will sponsor the cameras, but that's pretty rare. The cameras are often positioned so that the sponsor's logo can be plainly seen, whether it's a sticker on the hood that can be seen by the roof cam or the badges plastered on the driver to be picked up on the doggie cam. Sponsoring the cameras for a season usually costs about $30,000, though the price can climb to $50,000 for popular drivers who are consistently high in the standings.

­We now know who gets the cameras and how they get into the car. The next step is to find out how the signal gets from the cockpit of a NASCAR racer to our TV screens.

Though in-car cameras have a reputation for increasing weight and drag in NASCAR races, that hasn't kept drivers from winning with cameras on board. For example, in the 2008 season, every road race (races on any track that's not oval) was won by a car with a set of cameras installed -- including two NASCAR road races held in Mexico.

From Camera to Living Room

In the early days of in-car cameras, getting the signal from the car to the home viewer's television was a bit tricky. The in-car camera would broadcast images to a helicopter hovering over the track, which would return the signal to a trailer owned by the broadcast company.

The process is similar today, but it takes a lot less fuel. The helicopter has been replaced by receivers placed along the top of the track's bleachers. The in-car cameras send out signals that are picked up all along the route by the receivers. These receivers send the signal to a trailer, just like the helicopter did, where it's processed for television. The finished signal is then sent to the network carrying the broadcast.

­The signal gets from the network to our TV sets like everything else does, via cable, satellite, Internet connection, or over the air and into a set of rabbit ears perched atop the television. The in-car cameras have created a sense of intimacy for at-home NASCAR fans. They feel even more connected to their favorite drivers when they can see that driver pump his or her fist as he or she cross the finish line, or when they can hear their favorite driver communicate with the crew chief about his or her car's performance on the track.

Companies like the satellite television provider DirecTV have signed deals with NASCAR to take advantage of this relationship between fans, drivers and the in-car cameras. DirecTV, for example, offers a "NASCAR HotPass" package with high-definition images from in-car cameras and dedicated audio channels for selected drivers.

As technology advances and cameras are able to deliver crisper images from tinier equipment, you can bet NASCAR will take advantage. Infrared engine cam? In-helmet cam? Anything is possible -- as long as NASCAR can find someone to sponsor it.

NASCAR's Nextel Cup series isn't the only one using in-car cameras. They're found in NASCAR Nationwide and Truck Series races, of course, but other sports have used shrunken, high-tech cameras to bring fans inside the action. Hockey's in-the-net goal-cam and baseball's catcher-mounted mask-cam are a few examples of this phenomenon.

Did NASCAR Really Start With Bootleggers?
How NASCAR Tire Technology Works
What were the stock car tire wars?