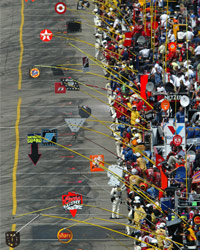 ­As we've seen so far, sometimes the simplest tools can be the most useful. That certainly holds true for the last tool on our list -- an extension pole. That's right, a long stick. It doesn't get much more basic than that; however, extension poles are a key tool in the pit crew's toolbox. The irony of this essential tool selection isn't lost on us -- rarely does the extension pole ever even touch the car. Since NASCAR rules specify how many people can come over the pit wall to work on a car during a race, crews use extension poles to perform some of the needed maintenance from behind the wall.

With an extension pole, the crew can clean the car's windshield and scrub debris off the grille to improve airflow. Extension poles are also used to get a quick drink of water to the driver. The most important extension pole use is actually performed before the car even enters the pit. Crews use signs on the end of an extension pole to signal their driver into the correct pit area. While this sounds like a simple use, the pit area is a busy and confusing place, especially for a driver who's been racing all day. Getting the car into the correct area quickly and safely saves precious seconds that can add up to victory.

Don't stop now; go to the next page to access more HowStuffWorks top-10 and top-5 lists. 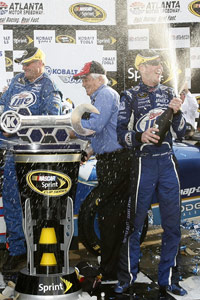