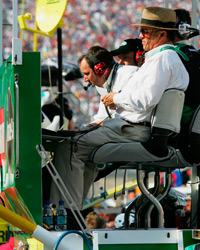 A pit box provides a high-tech way to monitor the car during a race -- and keep a close eye on the weather, too.
John Harrelson/­Getty Images for NASCAR

­A NASCAR crew's pit box is sort of like the bridge of the starship Enterprise. It's loaded with electronics, all of which relay important information to the crew. A typical pit-box has two satellite receivers to monitor the weather and track conditions, as well as several flat-screen monitors for close-up views of their car on the track. By getting a closer look at their car, they can anticipate and diagnose problems, as well as act as an extra set of eyes for their driver. Pit-boxes also contain several computers to monitor conditions regarding the car's performance.

Pit-boxes also t­ypically have a few less high-tech tools. The pit-box holds all of the team's hand tools and even a wheel-and-axle assembly -- so the team can practice changing tires when the car itself isn't available. Finally, the pit-box has an electrical generator -- just in case the track loses power. Having a generator means the crew won't lose all of the data they're gathering, or the ability to monitor the race.

­Pit-boxes are great for monitoring the car when it's on the track, but keep reading to learn about the tools the crews use when the car is in the pit area.