Why are peanuts unlucky in auto racing? 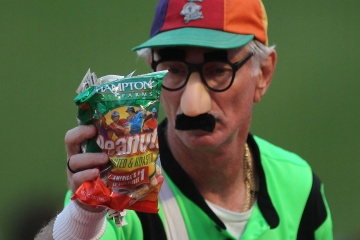 You won’t see any peanut vendors at a racing event.
Marc Serota/Getty Images

As nutty as it sounds, peanuts are not welcome at many racing events, unless they've already been removed from their dusty cross-hatched shells. If you're going to a race and just can't skip your favorite source of fat and protein, you can bring a bag of salted, dry-roasted or honey-roasted shelled peanuts, a jar of peanut butter or a Baby Ruth candy bar. All of that's fine. But if you bring a bag of peanuts that are still in their shells, you just might be cursing your favorite driver and perhaps even putting spectators at risk.

You probably won't find peanuts in shells for sale anywhere within a stadium on race day, although they might still be available at county or state fairs that hold racing events. If you bring your personal stash down to the pits, you're going to make some enemies. It's no joke. Plenty of prominent drivers, including Dale Earnhardt Sr., have reportedly stated that they believe this superstition.

Why? Well, it's a legend, of course. Professional race car drivers are among the most superstitious of all athletes, and there have been enough peanut-related incidents in the sport's sordid history to earn this otherwise innocuous snack a reputation as an unlucky charm. In fact, there are two fatal race-day crashes that shoulder most of the blame, both of which occurred in 1937.

The first involved two racers that went off the road at Langhorne Speedway in Pennsylvania. When both cars came to a stop in the spectator area, there were peanut shells near the wreck (and everywhere, really) because peanuts were a popular snack at such events. The drivers in the Langhorne incident were both fine, but several spectators were injured or killed. That same summer, in Nashville, an on-track pileup caused the death of one driver, and again, the peanut shells that dotted the landscape were interpreted as a bad omen. However, there's a newspaper article from 1933 that mentions (but does not explain) the peanut superstition, so it's possible the role of peanut shells in the 1937 crashes were blown out of proportion.

Now, peanut shells are viewed with suspicion at any racing event, even though peanuts in their shells were as common then as beer and hot dogs are today. In other words, race car drivers are so superstitious that they won't go anywhere near a peanut shell on a race day, even though the mere presence of a peanut shell at the scene of a crash is about as meaningful as corn dog sticks or discarded beer cans.