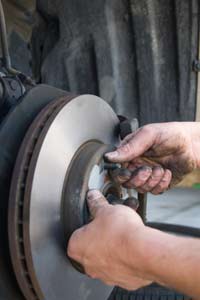 Sometimes it's easier to bring your car to a mechanic rather than replacing brake parts on your own.
©iStockphoto/Alina Solovyova-Vincent

One of the most common maintenance jobs performed on any vehicle is replacing the brakes. When they start to feel a bit squishy or begin to squeal, something must be done. Maybe you can swap out brake shoes yourself, or maybe you need to take it to the shop to get the job done. But what's holding all those brake parts together? If you're talking about drum brakes, the unsung heroes are the brake backing plates.

Brake plates are, according to the automotive glossary at AutoZone.com, "Stamped steel plates upon which the wheel cylinder is mounted and the brake shoes are attached; metal plates that serve as the foundation for the brake shoes and other drum brake hardware" [source: AutoZone].

Which means that without the backing plates, the brakes would have nothing to hold on to. In order for friction to stop the vehicle, the brake shoes must be firmly fixed -- that's where this particular brake part comes in.

­There can be some confusion around the term "backing plate," as it can also refer to a part used in disc brake systems. The brake shoes in those systems have a backing plate to which the friction surface is glued or riveted. They are shaped like commas, whereas the brake backing plates found in drum brakes look more like shallow dishes with holes used for fasteners.

­Now that we know where the backing plate is located and what it looks like, let's look a little further at the function of backing plates. 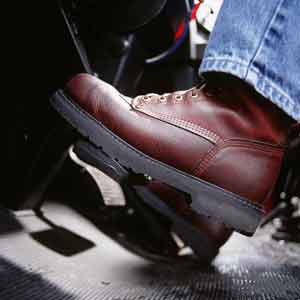 Your braking system -- held together by backing plates -- gets to work when you press the brake pedal.
Ryan McVay/Photodisc/Getty Images

The function of backing plates is to hold the braking system together so it can work properly. With drum brake systems, each wheel has two curved brake shoes mounted on the stationary backing plate. The brake shoes are shaped like the letter C with friction material on the outside curve. They're attached to either side of the brake plate. This assembly is, in turn, mounted inside a cast-iron drum that rotates along with the wheel. Springs hold the brake shoes in place so they don't contact the drum when the brakes aren't active.

The friction material on the outside edge of the brake shoes coming into contact with the inner surface of the brake drum is what stops the car. But without the stability and function of brake plates keeping all of these brake parts in place and taking the brunt of the braking force, none of it would work.

If you want some more information about backing plates and the other forces that bring your car to a halt, stop by the next page.

Why is there air in my brake lines?
How Brake Pads Work
What are the brake tools needed for brake tests?