The Atom in America 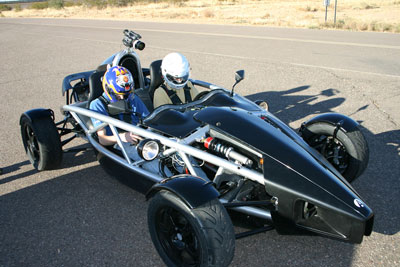 In the United States, the Atom is available through Brammo Motorsports, an Ashland, Oregon-based company that specializes in manufacturing niche production vehicles for the North American market. Brammo was founded in 2002 and currently employs 27 people. Brammo CEO Craig Bramscher became interested in the Atom after taking the car for a test drive. When Ariel started looking for an American dealer, Bramscher felt that Brammo was a good match. After evaluating several companies, Ariel agreed and entered into a licensing agreement with Brammo.

As mentioned earlier, Brammo's version of the Atom specifies a General Motors Ecotec engine instead of the Honda iVTEC specified by Ariel. Otherwise, Brammo adheres strictly to the vision of Simon Saunders, handcrafting each car one at a time. Brammo has six vehicles already built, with 50 on order. Ten potential customers fly in for test-drives each month. In five years, Brammo plans to be making a thousand cars -- and $80 million -- annually.

Brammo's aspirations don't end with the Atom, either. Lead Designer Brian Wismann, a veteran of Daytona racecar body designing, is hard at work on Brammo's own line of specialty vehicles. One of these is the Brammo Rogue GT, the first V12 American supercar designed and built in the U.S. for the world. The company also has plans for a V8 supercar, priced under $200,000, that will be marketed under the name Ronin GT, as well as an environmentally friendly electric vehicle and an alternative-fuel racecar that runs on liquid propane or hydrogen.

So will we see Atoms zipping by us on the interstate or throwing back a cloud of dust as it barrels down a country road? It's not likely -- the Atom will probably be a rare sight on the highway. After all, it is only street-legal if assembled as a kit vehicle, and there are only a few registered Atoms in the United States. As a turnkey vehicle, the Atom is sold as off-road-only for track-day use. And it's there -- on America's tracks -- that the Atom will continue to break records and leave jaws hanging on the ground.