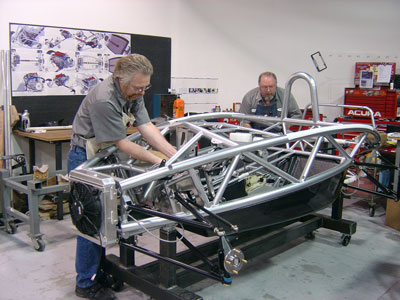 The body of the Atom is almost nonexistent. What bodywork there is comes in the form of separate composite panels. This reduces weight, lowers the cost and allows easy access to the mechanical components of the vehicle. The Atom's designers spent a lot of time in the wind tunnel working out the aerodynamics of the vehicle. Like most racecars, the underbody of the Atom sits low to the ground, decreasing the airflow -- and the air pressure -- under the car. At the same time, the body shape generates front and rear downforces, which are vertical forces directed downward, perpendicular to the ground. As the Atom moves through the air, it is both "sucked" down and pushed down, increasing the traction of the car and giving it superior handling characteristics.

With very little bodywork, the tubular steel chassis is exposed. Indeed, it is visually one of the most stunning and unusual features of the Atom, giving the vehicle a skeletal, almost unfinished look. But don't be fooled by appearances. Expert welders handcraft each chassis using techniques and materials that ensure the highest levels of quality and safety. For example, the welders join the large-diameter steel tube with bronze and tungsten inert gas (TIG) welding. In TIG welding, the heat to melt the metal is generated by a tungsten electrode arc. The weld area is protected from atmospheric contamination by a shielding gas, usually an inert gas like argon. Because the operator has greater control over the weld, TIG welding results in stronger, higher quality welds. 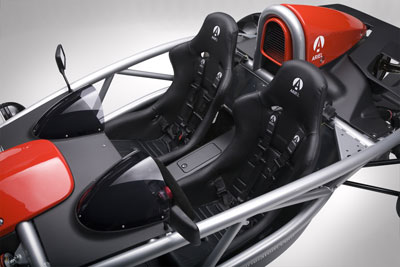 The Cockpit
The Atom's composite twin-seat unit accommodates two large adults, who are cradled inside the tubular frame of the chassis. The high side rails of the Atom offer substantial protection for both driver and passenger, as do the integral front and rear rollover tubes.

The seat was also designed for safety. It has high lateral support to keep the driver optimally positioned in the cockpit to maintain control at all times. The seat can be adjusted forward and up through five positions to account for drivers of any size. Most importantly, the Atom comes with either four-point or full harness seatbelts that conform to government safety standards, as well as standards set forth by the FIA, the governing body of the racing world.