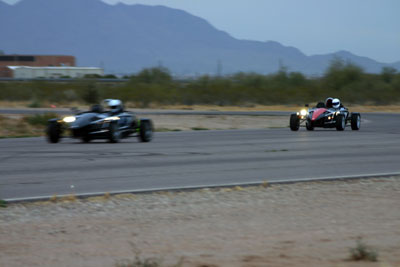 Strictly speaking, the Atom is a supercar, a type of sports car made in relatively low numbers and with high-performance features that rival racecars. Even with their exotic look and superlative performance, supercars are generally designed to be street-legal. But it's on the track, where speed limits and traffic laws don't apply, that supercars truly shine.

Virtually all supercars accelerate from zero to 60 mph in under four seconds and can reach top speeds of 180 mph or faster. A low weight-to-power ratio (pounds per horsepower) makes this kind of performance possible. Remember Newton's first law of motion? It describes inertia -- the tendency of an object to remain at rest or an object in motion to remain in motion unless acted upon by an unbalanced force. The more mass an object has, the more inertia it has; the more it will resist changes in its motion. That's why super-lightweight cars have such high acceleration. Their lower inertia makes them easier to move, especially when a 250-horsepower engine is generating the force causing the motion.

So how does the Atom stack up to other supercars when measured against key performance criteria? First, the Atom weighs just a little more than 1,000 pounds and comes with an engine that generates up to 300 horsepower. In contrast, a Lincoln Town Car weighs up to 4,500 pounds and has a 239-horsepower engine, resulting in a weight-to-power ratio of 19 to 1. As the table below shows, the maximum weight-to-power ratio of the Atom is far below a Town Car's -- and is among the lowest of all supercars.


The Atom's acceleration also stands out. Based on its phenomenal zero-to-60 performance, it has won the distinction of fastest production car in the world. The one supercar attribute you won't find on the Atom, however, is a six-figure price tag. It ranges from $35,000 to $75,000 -- a pittance when compared to the McLaren F1 or Bugatti Veyron, both of which carry $1 million price tags. Even the Porsche Carrera GT, priced at $440,000, costs almost six times as much as the Atom.

Although the Atom meets the performance criteria of the supercar category, it doesn't look like a typical sports car. That's because Formula One racers inspired its engineering. It has a nose cone, a low, wide shape and an engine mounted behind the driver, who is exposed to the elements because the vehicle lacks doors, a windshield or a roof. To help produce downward force on the vehicle, the Atom has a rear wing that also serves as an engine cover. 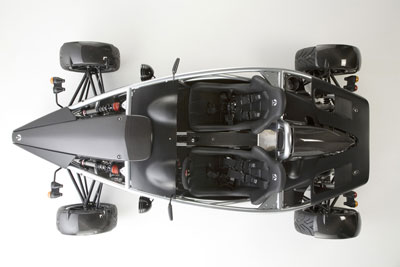 From a distance, the Atom even looks a little like a Cooper Formula One racing car. But unlike a true racer, the Atom isn't confined to the track. It is equally at home on the highway -- and in the car enthusiast's garage. That's because the Atom doesn't require a team of professional mechanics to keep the car tweaked and tuned. It's easy to drive, easy to maintain and economical to own. In the next section, we'll see how the Atom pulls it off.