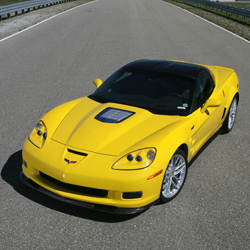 USA! USA! The only American entry on this list of top speeds is of course the Corvette ZR1, one of the most powerful production cars available, making more than 600 horsepower. In a land of Porsches and Mercedes-Benzes and Audi R8s, the 'Vette we take for granted is a special kind of speed demon in Germany. Granted, the ZR1 is a special kind of speed demon no matter where it is.