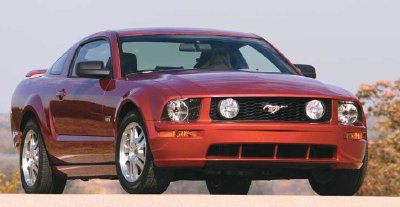 The redesigned 2005 Ford Mustang and the 2006 Mustang and 2007 Mustang models it has spawned showcase everything that's best about America's favorite pony car. Perhaps best of all, they look and perform like Mustangs should.

The links below take you behind the scenes to explore the creation and launch of the 2005 Ford Mustang and the changes it's undergone for 2006 and 2007.

The shape of these cars was ordained by a superstar stylist with a European pedigree. J Mays decreed the clean-sheet 2005 design would recapture the style that established Mustang as a classic, and that's what he delivered.

Their engineering was directed by a man who as a child in war torn Vietnam idolized Mustang as a symbol of freedom. Hau Thai-Tang idealized the little Ford as an American icon that put sporty-car fun within reach of nearly everyone, and that's what he delivered.

The personality of these new cars was inspired by the most charismatic Mustangs ever. Designers and engineers plastered their workshop walls with photos of Steve McQueen's '68 Bullitt fastback, parked prototypes next to a '70 Boss 302, and made sure never to even look at a '74 Mustang II.

The original was reborn for 2005, newer than ever, familiar as always. For the first time, Ford had created a car from the ground up to be a Mustang. No sedan chassis compromised its shape or occupant packaging, no economy car powertrain had to be accommodated. This was the Mustang lover's Mustang.

That is not to say it didn't suffer some compromises. Its solid rear axle seemed an anachronism; cabin plastics were embarrassingly low budget. And what did the future hold for that "retro" styling?

This is the story of the creation of the newest Mustang, told here in unprecedented depth and breadth. Here's a preview: