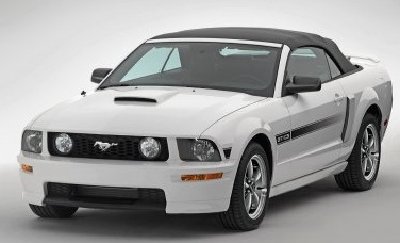 The highlight of the '07 model year for the 2007 Ford Mustang was the Shelby GT500, the most powerful production Mustang ever. This car actually went on sale in early 2006, but technically was an '07 model.

The signature addition for the traditional '07 model year was the Shelby GT, basically a "civilian" version of the Hertz-rental-only 2006 Ford Shelby GT-H. Even the Shelby GT, however, didn't hue to the customary autumn model-year kick-off. Its production began in December 2006. So three Mustangs wore some form of Shelby badging at the same time. Ford was certainly getting its promotional dollars' worth out of 'ol Shel.

But what of mainstream '07s? Well, GT models were available with two new packages, the GT California Special edition and the GT appearance package.The Mustang GT California Special recalled a popular 1960s treatment and was available on GT Premium models. It added $1895 to the $26,805 coupe or $31,630 convertible. The GT/CS included 18-inch wheels, body side scoops, unique tape stripes, rolled bright exhaust tips, a chin spoiler 1.5 inches lower than the GT's, and unique front and rear fascias. Inside, black leather seats were trimmed with "Cal Special" contrasting Dove or Parchment leather inserts.The GT appearance package cost $245 and featured rolled exhaust tips, an engine cover with a Pony emblem, and a decorative hood scoop. It could be combined with the GT/SC equipment. For all models, Grabber Orange was a new color, an auxiliary audio input jack was standard, satellite radio was a new option, and a new comfort package featured heated front seats. A navigation system was a first-time feature planned for late in the model year.

The 2007 Shelby Cobra GT500 was developed by SVT to replace the Cobra, and previewed with an undisguised coupe "concept" in April 2005. It was an unabashed throwback to the rip-roaring days of Carroll Shelby's Mustang GTs, only with far more actual power and speed than the best of that legendary breed possessed.Ol' Shel even helped SVT keep the new GT500 true to his principles, having resumed his relationship with Dearborn a few years before as an advisor on the midengine Ford GT supercar. Read about his hot new baby on the next page.Want to find out even more about the Mustang legacy? Follow these links to learn all about the original pony car:

The Mustang saga involves scores of specifications and key events. Here are the best: