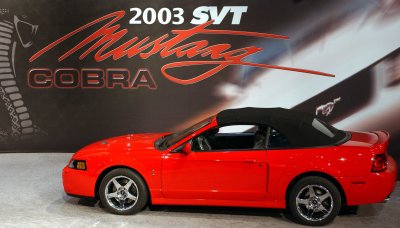 Ford's SVT group took over the task of coming up with hot limited-edition street cars, with support from the Special Vehicle Engineering staff. See more pictures of the Ford SVT.

Despite the relative lack of success of the Mustang SVO models of the mid-1980s, Ford execs were generally pleased with the work of their Special Vehicle Operations unit, the in-house performance arm that had created that car and a slew of winning race cars.

By the early 1990s, however, SVO had become a victim of its own success, with too much work to do and too few people to do it. Accordingly, Ford reorganized and refocused its performance and competition activities.

SVO would continue running corporate racing programs and developing over-the-counter speed parts, but the task of coming up with hot limited-edition street cars passed to the newly created Special Vehicle Team (SVT) headed by John Plant. At about the same time, a Special Vehicle Engineering staff (SVE) was formed to support both SVT and SVO.

As one press release stated it, SVT's mission was "to use the best-available resources from both inside and outside Ford [Motor Company] to explore new ways of creating and marketing high-performance vehicles. The cross-functional team is charged with delivering limited-edition, high-performance derivative cars and trucks designed to delight serious drivers.... SVT's refined, understated 'form follows function' philosophy reflects our passion for multi-dimensional performance."

Sales and service would be handled "through a select network of specially trained and certified Ford dealers who are prepared to satisfy discriminating driving enthusiasts before, during and after the sale."

SVT unveiled its first two progeny at the 1992 Chicago Auto Show. Both were early 1993 models: the SVT Mustang Cobra and a hot-rod full-size pickup, the SVT F-150 Lightning. Respective model-year production was 4993 and 5276.

These three generations of competition-oriented SVT Mustang Cobra Rs (from left to right, 1993, 1995, and 2000) are pictured in their natural element: the racetrack.

Then, for the next two years, nothing. Several factors were at work. First, Plant retired in March 1995, and though his successor, Tim Boyd, made no big changes to planned projects, the team apparently ran into engineering delays on its next Lightning, a supercharged stormer based on the redesigned '94 F-Series.

SVT was also busy with its first sports sedan, a tuned version of the Euro-style Ford Contour, for which top brass had high sales hopes. SVT might have been created to "polish the Ford oval," but it was also expected to make money, or at least break even.

The Ford SVT team had to earn its keep, but keeping buyers and dealers interested in its Mustangs and other offerings was a challenge.

But the main problem was some evident grumbling in the dealer ranks. As Car and Driver reported in August 1995, each Ford store paid a $4000 annual fee to be an SVT agent, not to mention investment in special equipment and training. Yet some dealers had bailed, in part because SVT Mustangs couldn't compete on muscle with top-power, regular-production General Motors rivals.

"If these dealers lose interest, Ford loses interest," C/D intoned, "and that could mean all the SVT employees and engineers go back to designing cupholders for the Crown Victoria."

The good news was that the SVT Contour was a sales success, along with other models from the SVT team. Keep reading to learn how SVT boosted sales (and managed to justified its own existence). 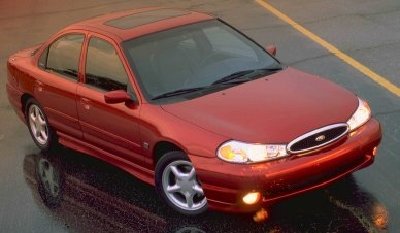 Ford observers were concerned that the SVT group wouldn't be able to earn its keep. It was losing the support of the dealers, and if the team couldn't at least break even financially, Ford was likely to cut it loose.

Happily for Ford fans, that didn't happen. The SVT Contour, appearing on cue for 1998, was a fair commercial success with 11,445 sales through model-year 2000, after which Ford canceled the Contour itself.

Meanwhile, the SVT Cobra became a permanent and, yes, profitable part of the Mustang line, a bread-and-butter model to rival the Lightning in yearly sales, monetary return, and publicity value. For 2002, the team stepped into the youthful, fast-growing "sport compact" market with the SVT Focus.

which contributed to its healthy sales.

By that point, SVT was under the enthusiastic command of John Coletti, who had led the 1994 SN95 Mustang program. Assisting him were chief engineer Mike Zevalkink, who'd been powertrain manager for SN95, and marketing and sales manager Tom Scarpello.

When SVT marked its 10th birthday as part of Ford's 2003 centennial, it had built over 100,000 vehicles, no mean feat for what remained a small part of a big corporation. "Ten years and we're just picking up speed," Coletti said at the time. "You haven't seen half of what we can do."

This 2004 Ford SVT Focus was one of the SVT group's last projects before being combined with Ford Racing into the new Ford Performance Group.

But then the landscape changed once again. Given heavy responsibilities in the development of the midengine Ford GT, SVT's delivery of products to the showroom ground to a halt.

Ford's next high-performance headliner, the 2006 Mustang Shelby GT500 saw peripheral SVT involvement but, tellingly, was offered through all 3,900 Ford dealers, not just the old SVT-certified network.

For those keen enough to notice, Ford's de-emphasis of its SVT arm was evident as early as 2004, when the promised 500-horsepower SVT Lightning pickup was killed. Similarly, the Sport Trac Adrenalin shown in 2005 never came to pass.

Observers speculated that the strain of preparing the midengine Ford GT in time for Ford's centennial had diverted the small SVT staff's attention from developing other cars. Perhaps more significantly, the executives who oversaw and supported SVT had by early 2006 shifted to other responsibilities. Among them, Coletti had retired and Scarpello had moved to Jaguar.

But SVT wasn't dead. If not quite the fully independent in-house tuner that created specialized performance products for sale under the SVT banner, its spirit lived on in such entities as Ford Racing Performance Parts, which marketed speed equipment through dealers. In '06, none other than 2005 Mustang cheif engineer Hau Thai-Tang was named the new head of SVT, and while its car-guy-catering dealer network may have been stuck in neutral, if you looked closely, the proud SVT insignia was in evidence here and there on the mighty Shelby GT500.