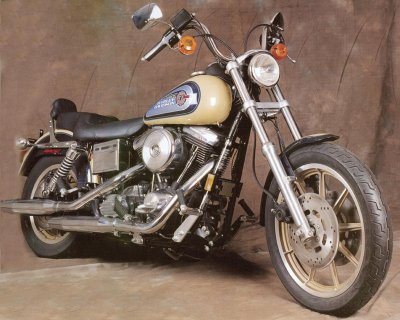 The 1992 Harley-Davidson FXDB Daytona was named in honor of the bike rally in Daytona Beach. See more motorcycle pictures.

The 1992 Harley-Davidson FXDB Daytona drew its name from Daytona Beach, Florida, which (along with Sturgis, South Dakota) hosts a major motorcycle event each year.

While the Sturgis wore somber black highlighted with touches of orange, the Daytona was dressed in brighter shades with a more traditional level of chrome trim and boasted Harley's first true pearl paint job. On the tank was a special decal announcing the 50th anniversary as taking place in March of 1991.

Triple disc brakes were bolted to color-matched cast wheels, and highway pegs were mounted to the lower frame. Production was limited. Only 1,700 Daytonas were built, which was not nearly enough to go around.